This was probably as tough as it could have been, really. They're big local rivals and playing them away from home was a really difficult opener for us.  It was a pretty even game and I think, on reflection, there were some signs that maybe things were going to go our way.

We won with a goal from Barry Mason in the first 20 minutes, but Matt Brown, our keeper, saved a penalty too.  Winchester came down from the Southern League with us the season before so they would really have been looking for a decent run in the competition.

A lot of people were even saying that this should have been a Quarter or Semi-Final, rather than a First Round tie.  As it was, we just about squeezed through to the next round.

This was a real local derby because they're only about two miles from us here in Sholing.  We won the game 2-1 and, to be fair, that was a fairly comfortable win.

We went 1-0 up through a goal by Lee Wort, but then they pulled it back and equalised with a penalty which perhaps made it a bit more nervy than it needed to be.  In the end Mike Carter popped up and scored the winner.  It never really felt that we were going to lose that game if I'm honest, although Follands have had a decent season in the league.

From memory their keeper had an absolute blinder and we could and probably should have won by a few more to make it a bit more comfortable.

We were looking for a home draw, but instead got another tough away tie.  They were another decent side and they started the game better than us.

We scored a goal through the captain, Byron Mason, on ten minutes which really calmed us down.  They equalised, but then we scored again on 50 minutes before grabbing a couple more as the clock ticked down.  In the end it looked comfortable but perhaps 4-1 flattered us just a little bit.

At the end of the game the lads were sat in the dressing room feeling pretty pleased, but The Vase is one of those competitions where there's so many rounds that you're never too sure where you are. Certainly no-one was talking about Wembley!

Out of all the matches we played I would say this was possibly the most comfortable.  We hardly played a game in January so maybe we were fresher than would otherwise have been, but we really did well that night.

We were 1-0 up, but again let them back into the game with an equaliser before we scored another two to make it 3-1.  We started that game really quickly, hit the ground running and they never really had a sniff.  That took us into the last 16, which gives you an idea of just how tough it is to reach the final, but the confidence was sky high by the time the draw for the next round was made.

It was probably this game that made a few of us think that were destined to get to Wembley.  We won it in extra-time when Lee Wort scored on 110 minutes and Matt Brown was man of the match, which tells you everything you need to know.

The defining moment came when Lewis Fennemore came on around 70 minutes.  He got the ball down and started passing it when we weren't playing well.  We looked a bit more likely to score then.

Larkhall were probably better than us, but that's cup Football.  It was our desire to get there that got us through in the end - that desire ended up being stronger than our fear of failure.

This was another hard game but when you get to the Quarter-finals of this competition you're not going to get an easy ride.

There were over 400 fans at the Silverlake and again, it was Lee Wort who scored the goal that mattered.  They were another very good side and were really giving us a bit of a pounding when we scored on the half hour. We defended very well though and by then we had really developed a knack of scoring just at the right time and doing just enough to get through.

Pete Castle, our centre-back, won the man of the match award and was absolutely superb all afternoon.  They hit the woodwork a couple of times from memory, but we held on!

The Semi-Final was definitely easier than the last two rounds. In the first leg we went 1-0 up before we conceded another equaliser.  This time we conceded a sloppy second goal before we switched Mike Carter to midfield and he really transformed the game.  He made it 2-2 and if we had another 20 minutes, I think we would have won the first leg.

We made a few tactical tweaks for the second leg and I think we really caught them on the hop. We were 3-0 inside 30 minutes, but at half-time the dressing room was as quiet as I've known it.  I think we were all just trying not to think of Wembley.  When they pulled a couple of goals back we were all fearing the worst, but when Nick Watts scored the fourth, we were finally there and the party could start!

This was not just a win for Sholing Football Club, the Sydenhams Wessex League and the city of Southampton. The Boatmen's sparkling FA Vase triumph – secured by 'Marvellous Marvin' McLean - was a victory for the whole of the south.

In doing so the newly crowned Sydenhams Wessex League champions broke the hearts of a quality West Auckland side who had come to Wembley for a second time in three years looking to exorcise the ghost of 2012 when they were beaten 2-0 by league rivals Dunston UTS. But they had no answer to the spirit, enthusiasm and sheer determination of this close-knit Sholing group who believed their name was on the silverware from day one.

With manager Dave Diaper, his trusty assistant Mick Brown and a handful of long-serving players due to bow out this summer, the Boatmen have had an unbeatable aura about them all through this year's competition, as if the football gods were willing them to reach the end of an era on a glorious high.

They haven't always been the better side throughout this magical March to the Arch and their defeated fifth-round opponents Larkhall, in particular, must be plagued with a feeling of 'what if.' Diaper's son Marc who, along with Tyronne Bowers and Lee Bright, is hanging up his boots, cited the 1-0 extra-time win over Larkhall on February 22 as "probably the game that made us think we were destined to get to Wembley."

On that occasion master marksman Lee Wort scored the winner, but the foundation of victory was an extraordinary goalkeeping performance by homegrown No1 Matt Brown. It was a similar story on Saturday as the Southampton-born 24-year-old, who had a three-year stint as a teenager with Saints, again scooped the man-of-the-match honours in a slender win. His stubborn show of defiance started as early as the fifth minute when he blocked with his feet to deny West's experienced top scorer John Campbell after Dennis Knight had slipped a pass through the heart of Boatmen's defence.

Campbell, an FA Trophy winner with Darlington in 2011, was one of several West Auckland players boasting previous Wembley experience. Three of Saturday's starting XI – skipper Andrew Green, right-back Neil Pattinson and striker Mattie Moffat – all played in the ill-fated final against Dunston. Sholing, in contrast, had several players who hadn't even experienced a Wembley final as a spectator, let alone trodden on the hallowed turf. And, in what must be a rarity even in non-League circles these days, a whopping ten of their starting line-up were born in the club's home city of Southampton – the sole exception being gritty midfielder Lewis Fennemore, who hails from Portsmouth.

Thanks to the vision of manager Dave Diaper, Sholing's nurturing of home-grown talent has truly paid off this term. With 55 league and cup goals to his credit in 2013/14, lethal marksman Wort is netting with as much regularity now as he did in his free-scoring teens. And, like Wort, Wembley heroes Brown and McLean are also products of the Boatmen's thriving youth and reserve teams.

Manager Diaper had a pre-match hunch that Sholing's pace might unhinge West Auckland and there were moments in the first half when they could have capitalised. With ten minutes gone Wort had too much in his engine for defender Daryll Hall, but was eventually snuffed out by Jordan Nixon as he tried to beat the 'keeper at this near post.  Then, just after the half-hour, Mike Carter slipped the ball into the path of McLean as he scampered into the left side of the area but, having outmuscled Pattinson, he skewed his shot well wide.

West Auckland responded with a sustained spell of pressure and even Diaper had to admit that he felt "the game was sliding away a bit towards half-time." But he made the necessary adjustments, dropping muscular skipper Byron Mason back into his customary midfield role, and there was a more solid look about the Boatmen in the second half even though they lost one half of their defensive twin towers, Pete Castle, to a pulled hamstring on 53 minutes.

Young sub Dan Miller – yet another home-grown talent – slipped in seamlessly, which was just as well considering the onslaught that awaited Sholing once McLean had broken the deadlock.

The magical moment came in the 71st minute when the nippy winger was expertly found down the left by the other twin tower, Lee Bright. Having left Pattinson in his wake, MARVIN MCLEAN nodded the ball on and unleashed a shot which deflected off defender Lewis Galpin and looped over the helpless Nixon into the far corner.

It was backs to the wall stuff for the rest of the game, a task made even tougher by a greasy Wembley surface battered by heavy showers. There were players slip-sliding all over the place but with Brown pulling off a string of heroic saves – most notably a fabulous tip-over from Knight's rapier-like free kick – and the hapless Galpin heading against the upright in the second minute of time added on, it really did seem as if "Sholing – FA Vase winners 2014" had been written in the stars.

Diaper, who sank to his knees at the final whistle, said: "It's family here and I had an inkling Marvin would get the winner because he seemed more focused than anyone else."

The only slight disappointment was an attendance of 5,431 which, no doubt, will again spark debate over whether it is economically viable to stage the final at the 90,000-capacity national stadium. But try to telling that to Sholing's elated players and officials and their 3,000-strong red-and-white army for whom this magical day out at Wembley will never be forgotten. 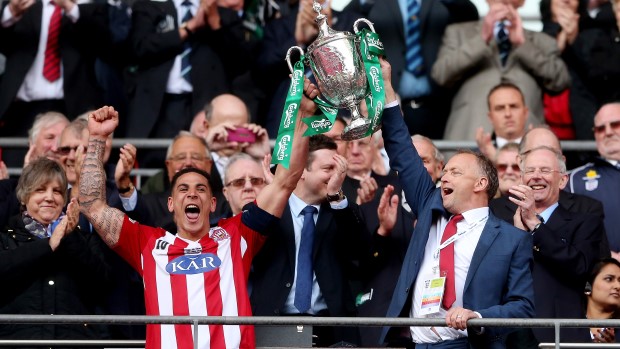