The Boatmen have a long, but fragmented history, running teams from the Woolston Works as early as 1884.

In March 1887 they were finalists in the first Portsmouth Challenge Cup, beaten 1-0 by Portsmouth Association Club. The Club were only beaten twice in 16 games that year (goal tally 72-6) and won the last Hants & Dorset Challenge Cup before those Associations split. 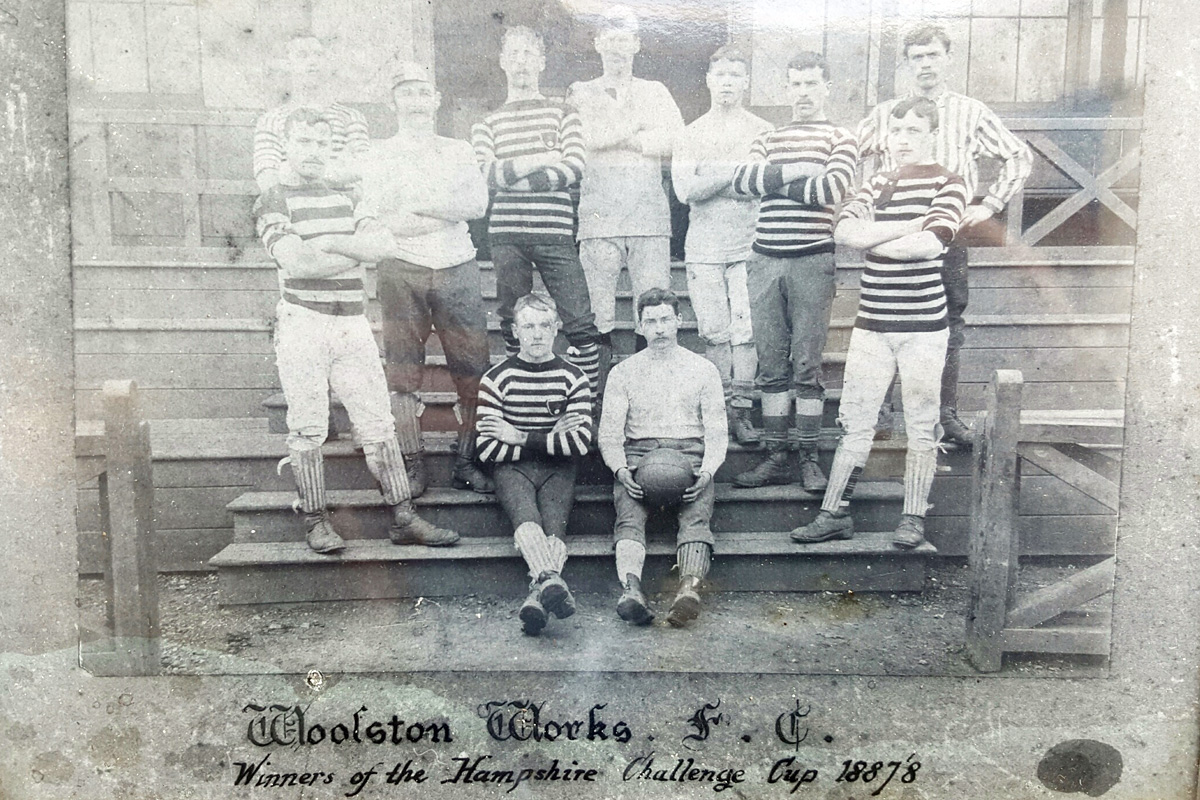 Woolston Works won the first ever Hampshire Senior Cup Final in 1888, beating Winchester 2-0. There was some controversy that year concerning Woolston's professional attitude, which was referred to as "Kesson's Boots'. Andover were beaten in an earlier round by Woolston, in which a Glasgow - based player called J. Kesson played a prominent part.

Andover protested that Kesson should be disqualified on the grounds of residency - although he had played for Woolston Works earlier that season, he had since moved back to Glasgow. Woolston's appeal rested on the fact that Kesson had left a number of clothing items at his lodgings in Woolston, and this should be interpreted as his intention to return. The Hampshire FA upheld the appeal and allowed Kesson to play.

Re-forming after World War 1 as Thornycrofts (Woolston), they were admitted into the Hampshire County League from 1919 to 1926. In 1920 Thornycrofts reached the FA Cup First Round proper (pictured below), meeting first Division giants Burnley at Fratton Park, and held them to a 0-0 draw in front of over 10,000 spectators, before losing 5-0 in the replay, three days later. Burnley were Football League runners-up that season before winning the Title the following year. 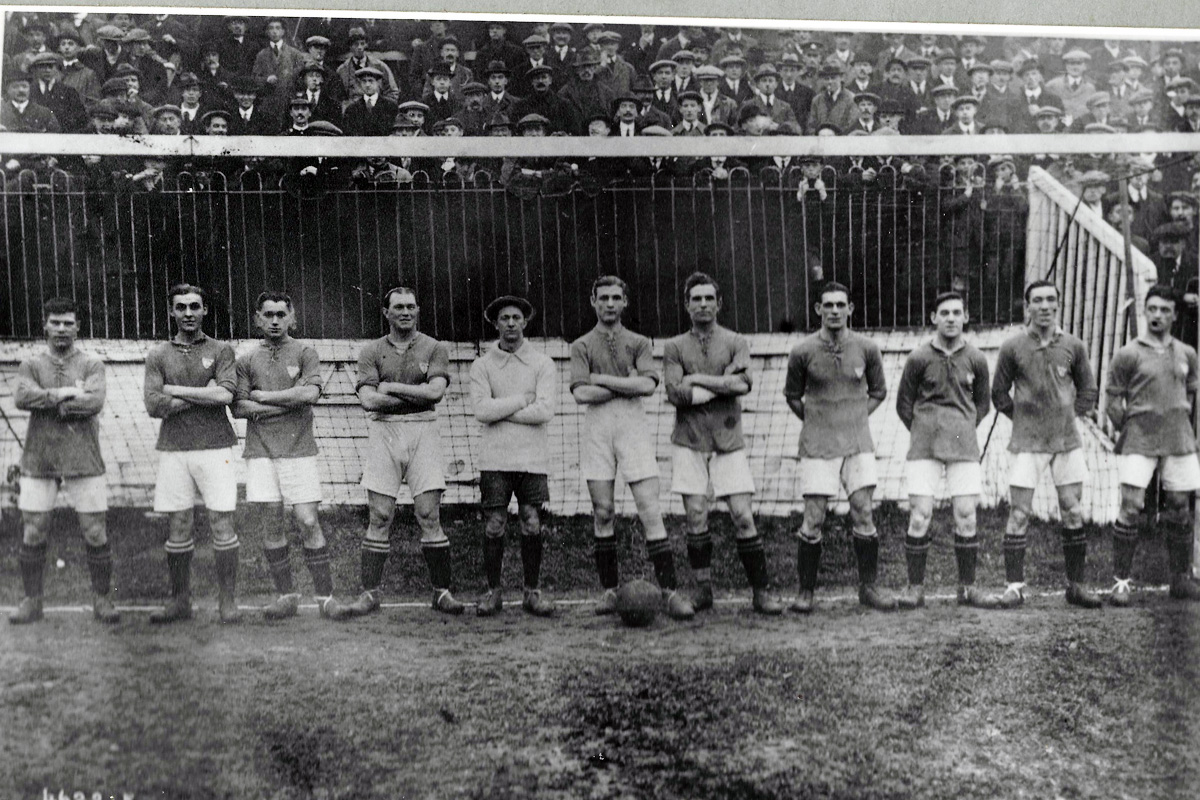 After World War 2, Thornycrofts Woolston re-formed in 1947 but were only able to keep going until 1952. 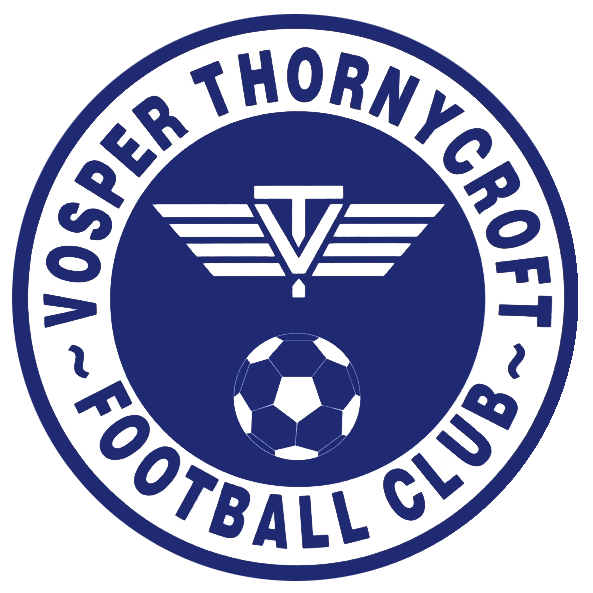 The Club were re-formed as VOSPER THORNYCROFT FC in 1960 and joined the Southampton Junior League. 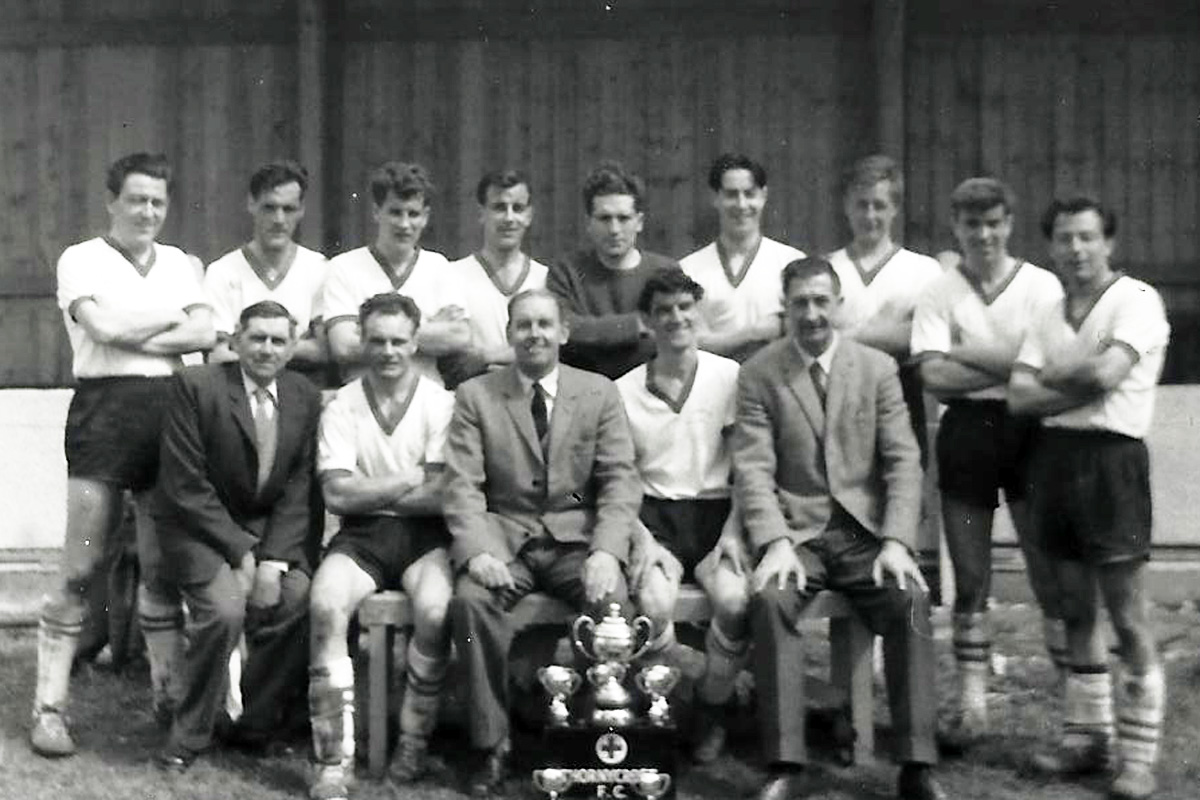 After many successful years in the Southampton Leagues, where the club won 6 Championships overseen by Arthur Fox, Trevor Lewis & Bill Boyle, Vospers were promoted to the Hampshire League Division 3 in 1991. The following season they were promoted to Division 2. 1997/98 saw Vospers as Hampshire Division 2 Runners-up and also Hampshire Intermediate Cup Winners.

2002/03 Vospers re-named as VTFC (after the parent company), and saw the Club as Runners-up in the Southampton Senior Cup.

2003/4 A double winning season as Hampshire Premier League Champions & Southampton Senior Cup Winners and promotion to the Wessex League for the first time.

2006/07 VT finished in third place and won the Southampton Senior Cup yet again. The Club's 4th victory in 6 years.

2007/08 Runners-up in the Wessex Premier League and continued our dominance in the Southampton Senior Cup, winning it for the third consecutive year.

2008/09 Club gained promotion to Step 4 for the first time by finishing as Wessex League Premier runners-up. Also won the Wessex League Cup with a 2-1 victory over Hamworthy United. Club reached the final of the Hampshire Senior Cup, but were defeated 1-0 by Fleet Town.

2009/10 In our first season in the Southern League South & West Division we finished a creditable 4th, reaching the play-offs, but were defeated by Bridgewater Town in the Semi Final. We reached the final of the Red Insure League Cup, but lost on penalties to Cambridge City. The Southampton Senior Cup was won again at St Mary's, defeating Team Solent 2-0. 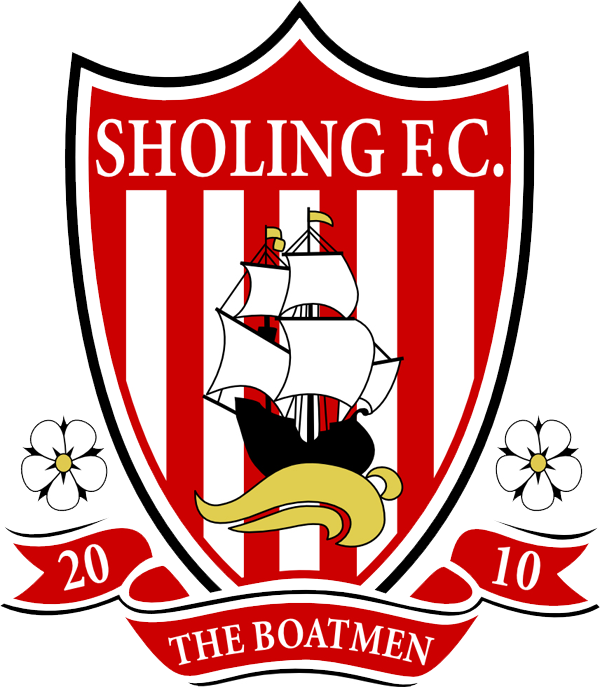 Club changed name in July 2010 to SHOLING FC after the parent company, VT Group, were no longer in existance with the closure of the Woolston shipyard.  We decided to reflect the name of the area of Southampton nearest the ground and adopted the Red & White stripes so associated with the City.

2010/11 In our second season in the Southern League South & West, we finished 2nd, but agonisingly missed out on promotion in the play off final, losing 1-0 to Frome. Was further disappointment in the Hampshire Senior Cup Final, losing 3-1 to AFC Totton.

2011/12 For the third season on the trot we reached the playoffs only to fall at the first hurdle to a 1-0 away defeat by Gosport.

2012/13 Despite being bottom of the league at Christmas, we went on a long unbeaten run in the second half of the season and finished 7th in the Southern League South & West.  The club made the difficult decision to voluntarily drop out of the Southern League.

2013/14 Back in the Wessex League Premier Division we weren't defeated until February. Despite having to play 20 games in 30 days due to a bad winter, Sholing won the title with 104 points and a goal difference of +105. We also won the Southampton Senior Cup at St Mary's.

Of course, the FA Vase win will be what most people will remember from this season.  The greatest honour in the club's history.  Back in October as we squeaked past Winchester City in the 1st round, no one was dreaming of Wembley, but as the rounds were ticked off, we started to get the feeling that our name was on the Cup.  So on the 10th May 2014 at the home of football, Wembley Stadium, backed by over 3,000 fans, Marvin Mclean scored the only goal in the 71st minute and Byron Mason & Dave Diaper lifted the Vase.

In a whirlwind of activity that followed, the team paraded the FA Vase in front of 30,000 Southampton FC fans at St Mary's, were given an official reception by the Mayor of Southampton and appeared on both local TV stations.

The Full story of the FA Vase run is on this section of the website. 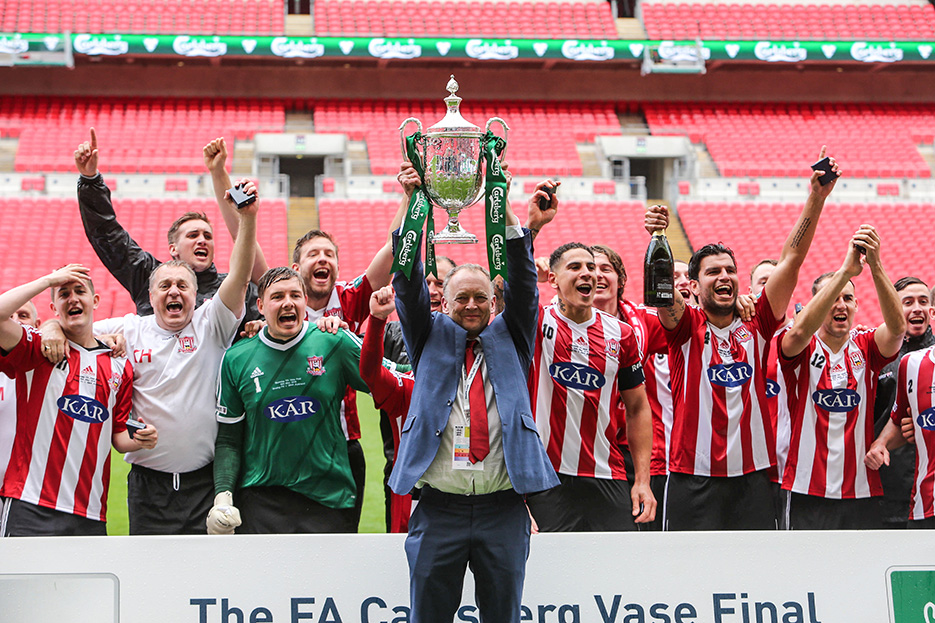 2014/15 We were granted promotion back into the Southern League South & West division, finishing in 17th. The Boatmen reached the final of the Hampshire Senior Cup for the third time, losing out 3-0 to Gosport Borough at Fratton Park. Ground grading issues saw Sholing relegated back to the Wessex League.

2015/16 Sholing finished runners up in the Sydenhams Wessex Premier League.

2016/17 Boatmen achieved 2 Cup Wins in the space of 3 days at the end of the season. Firstly winning the Wessex League Cup with a 2-1 win over Baffins Milton Rovers, then defeating Team Solent 3-1 at St Mary's Stadium to lift the Southampton Senior Cup for a record 8th time.  Sholing finished 3rd in the Wessex Premier.

At the end of the season, it was announced that Budweiser had selected Sholing to receive a £100,000 grant towards improving facilties (full story here). The club appeared on European wide Budweiser TV adverts and Dave Diaper, Byron Mason, Kev Harnett & Micky Travers were guests of Budweiser at the FA Cup Final where a cheque was presented on the Wembley pitch before kick off.

2017/18 Sholing finished 3rd in the Wessex Premier for the 2nd consecutive season, scoring 100 goals in the process.

2018/19 Sholing were crowned Sydenhams Wessex League Champions with 8 games remaining in a season where Dave Diaper passed 1000 games in charge. The Boatmen finished with a record title winning margin of 31 points and also the Wessex record for points per game (2.763). The club also won the Russell Cotes Cup for the first time. Dan Mason scored an incredible 64 goals in all competitions this season as the club gained promotion into the Southern League South Division One.

2019/20 After a slow start in the league, Boatmen picked up form after Xmas and quickly climbed from the bottom 3 to 10th place and were looking good for a possible late run for the play-offs, before the season was sadly halted by the Coronavirus outbreak.  Sholing created club history by reaching the First round proper of the FA Trophy for the first time.  Off the pitch, the new clubhouse was opened in December by James Beattie.

2020/21 After decades of trying, the club finally built a new changing room building and carried out a host of stadium improvements over a very busy summer.  In what must be a first for the Boatmen, we lifted silverware in October, winning & retaining the Russell Cotes Cup, which was held over from the previous cancelled season.  More history was made in the FA Cup when the club reached the 4th Qualifying Round for the first time where we were narrowly defeated by Torquay United.  The season was curtailed and no further games were played.  In May, the FA's non league restructure left Sholing in the Southern League South Div 1.

2021/22 Boatmen started the season well, soon topping the table and stayed in the top 6 until February.  A run of away game postponements, meaning long midweek trips, as well as a host of injuries, saw us drop out of the play-off picture and finish the season in 7th place. 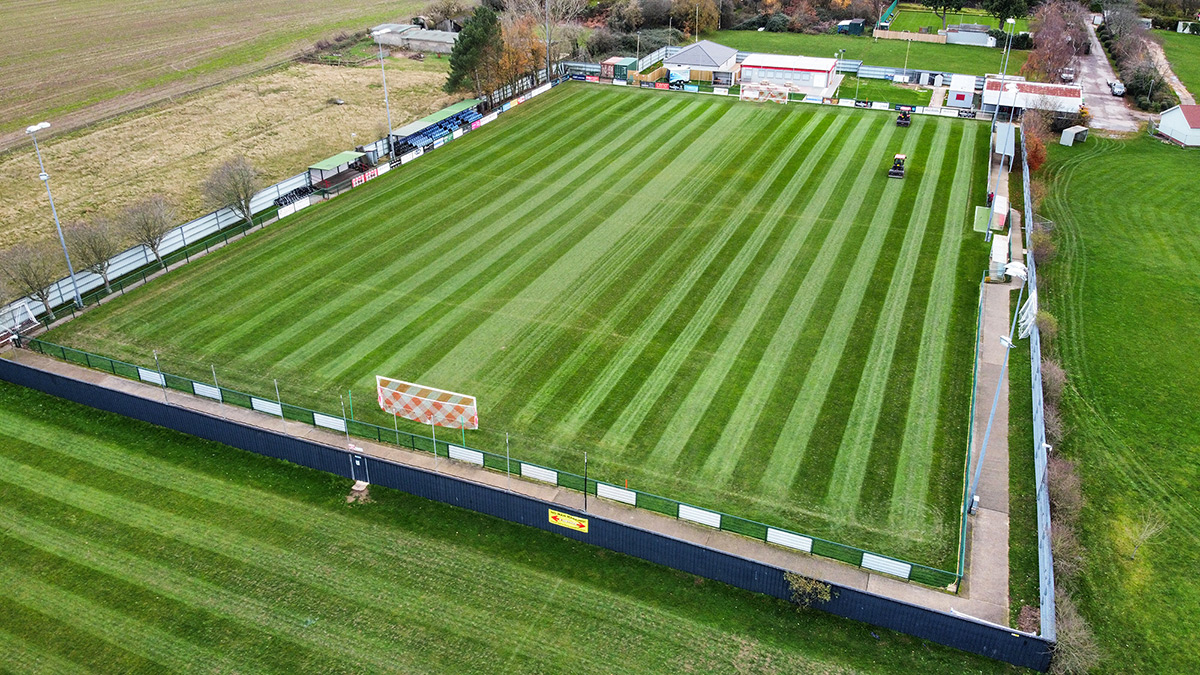