Man of the Match: Harry Butler

Sholing U18’s needed another dramatic penalty shoot-out to sink the Shots and progress in the FA Youth Cup. Aaron Whitmarsh's saves, Harvey Wright's winning spot kick and a huge amount of character from the whole team, saw the Young Boatmen through to the 1st Round Proper to equal the clubs previous achievement in the competition. 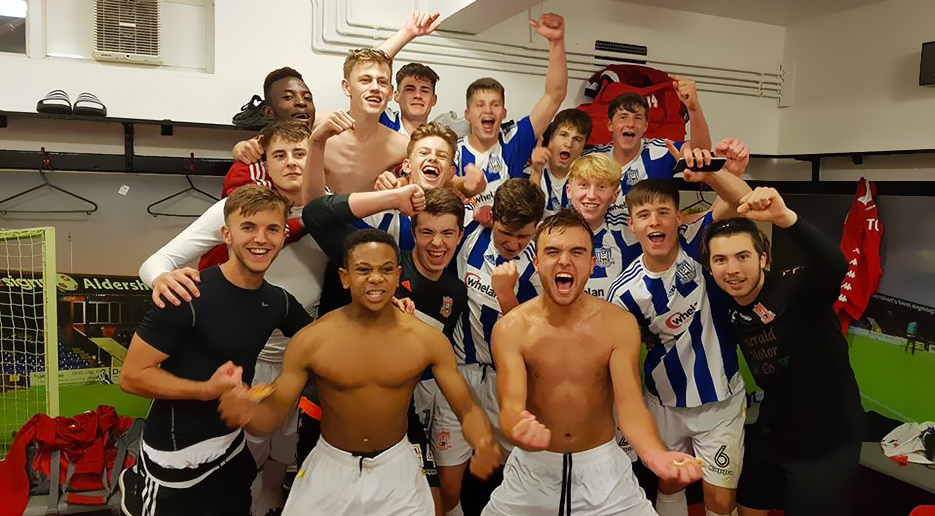 Team News: Steve Blackburn had to reshuffle his side on the morning of the game with Harvey Craig not recovering from his rolled ankle last Wednesday at Bashley. Connor Pearson stepped into the full back role with Jean-Luc Ramdin moving into midfield and it meant a late call up for to the bench for Ollie Shapland.

Sholing kicked off on a billiard table of a pitch with a back drop of a continual passing of trains behind the opposite stand. The open terraces were filled mainly of Sholing supporters and parents and the seated area allocated to Aldershot players and staff giving the impression to everyone that the crowd was larger than the 92 given on the night.

As expected Aldershot started out of the traps very lively and won back possession and inside the first minute it was George Root who tested Aaron Whitmarsh in the Sholing goal who palmed away the strikers shot for the first corner. Skipper Owen Royl headed it away for another corner. The next corner was cleared out to Brad Johnson but his pass to TK Madzvamutse was adjudged to be offside.  Then on nine minutes there was a scare for skipper Owen Royl when he took a bang to the head he appeared to be shaken but continued on.

On eleven minutes Aldershot were denied the lead when George Root got down low to head the ball goalwards only for Jean-Luc Ramdin to clear the ball off the line. Two minutes later it was again skipper Root who picked out Brown his cross was cleared but with Jesse Boateng twenty five yards out hit his shot against the Sholing crossbar. Luc Holden was the next to be denied by Aaron Whitmarsh and Brian Galach followed up but drove his shot wide. Jean – Luc Ramdin’s free kick is easily saved by Ryan Hall.

On thirty six minutes Ryan Hall was called into action again when Jean-Luc Ramdin got down the left and sent his cross into the path of Brad Johnson but the striker slid the ball into Ryan Hall. Brad Johnson again sees his shot go over Hall’s bar then Brian Galach puts his twenty yard shot just wide. HT 0-0

Sholing took to the field as the announcer welcomed both teams on to the field of play, but were left waiting for around five minutes for Aldershot and the match officials before the match got underway. The game started off as the first half had left off and Sholing were caught on a counter attack by Jesse Boateng who sets up Brian Galach who picks out Shots skipper Root to open the scoring on fifty minutes.

Then two minutes later the match was all square when Johnson’s free kick was parried by Ryan Hall and CONNOR PEARSON was the quickest to react to the loose ball and find the back of the Shots net. With five minutes remaining Frazer McLean, struggling from his earlier challenge, was replaced by Harvey Wright. Sub Harry Brooks sets up Montel Brown who slips the defence but Aaron Whitmarsh comes to Sholing’s rescue again. With the game into stoppage time Cameron Ross replaces Sholing goalscorer Connor Pearson. With the game heading to penalties Aldershot press for a winner but Sholing defend out the back to back corners. FT 1-1

Extra Time: Aldershot start the half off with a double chance but Aaron Whitmarsh denies Brian Galach and Harry Butler blocks Frankie Grieveson shot. Then it was again Galach denied a goal when James Johnson heads the ball off the line. Sholing win a corner and is cleared to Bradley Johnson and from twenty five yards out drills his shot just over Hall’s bar.

Then eight minutes in at the other end Aaron Whitmarsh gets his finger tips to Montel Brown’s shot from the resulting corner the ball gets through the Sholing defence to Montel Brown and beats Jean-Luc Ramdin on the line to put the shots back in front. Montel Brown once again has the chance to score but puts his shot over the bar. Sub Finley Warren was the next to be denied by Whitmarsh. James Johnson was the next to be cautioned for a foul on Guy Blackman with five minutes remaining. Then Harry Butler set up Callum Waughman but his shot was blocked by Blackman.

Aldershot looked to tighten up things by replacing the injured Brian Galach for Lewis Bebb to try and cut out the pressure from Harry Butler as Sholing looked for a late equaliser. With two minutes remaining Sholing completed their comeback when Jamie Staples' corner was headed home by HARRY BUTLER to break the Shots hearts.

However Sholing were not waiting to win the tie in penalties and went hunting for a winner and it was another corner that was half cleared and with the ball knocked back in and again Harry Butler turns on the ball and puts his shot just wide. With time up and stoppage time being played Bradley Johnson got in between two defenders but directed his header from eight yards out just over the bar.  FT AET 2-2

So to penalties at the East Bank end of the ground which was the furthest end away from the Sholing supporters.

Aldershot 1: Frankie Grieveson has his shot saved by Aaron Whitmarsh down to his left 0-0

Sholing 1:  Owen Royl is denied by Hall down to his right 0-0

Aldershot 2:  Harry Brooks hits the ball high to the right 1-0

Sholing 3: Cameron Ross shot is saved by Hall low to his left 2-1

Aldershot 4: Montel Brown has his shot saved by Aaron Whitmarsh 2-1

Sholing 4: Bradley Johnson drills the ball down the middle to score 2-2

Aldershot 5: Jesse Boateng scores in to the middle of the net 3-2

Sholing 5: Jean-Luc Ramdin fires the ball in to the roof of the net to take it to sudden death 3-3

Sholing 6: Harvey Wright hit the ball down the middle of the goal 3-4

Reaction after the game:

STEVE BLACKBURN (Manager): ‘WOW!’ what a night. I’m exhausted so goodness knows how the players are feeling! I could not be more proud of every single one of them, the togetherness of the team is second to none, they work hard as a group, play for each other and have a ‘never say never attitude’, they don’t know when they’re beaten and will fight to the end.

We went into the match with a game plan, we knew that Aldershot would be a very good, skilful footballing side who would look to keep possession of the football, we wanted to contain them for the first fifteen minutes, keep the game tight and maybe frustrate them a little, I knew if we done this the players confidence would grow and they would start to play football the way I know they can, and as the game went on we all started to believe this could be a very special night for Sholing Football Club, and although we could of snatched it in the final moments of extra time it wasn’t to be so the dreaded penalties it was..

I would like to say a massive Thank You to the travelling fans, the atmosphere they created was electric and helped the lads believe in themselves, as for the players they deserve all the credit every one of them played their part and will now have the opportunity to play in the first round proper of FA Youth Cup.

CARLY KINSEY (Youth Chairperson): “An absolute fantastic achievement for the lads and thoroughly deserved they matched Aldershot throughout the game. Their resilience and determination shone through. Massive thank you to all our supporters who travelled you were certainly our 12th man!! Most of these players have come through our Youth Section and have been with us six seasons which proves what we are doing at the Club in terms of Development of players is working.”

GREG DICKSON (Secretary): “It was good to see the support from 1st team players and management staff on Social Media etc following the game at the moment the atmosphere last night was up there with the achievement at Wembley in 2014, let’s hope we get a good draw in two weeks’ time and see if we can go one better in the competition than we have before”