Man of the Match : Jake Cope

Boatmen got the season off to a winning start with a dominant performance, 7 players making their debuts and some pre-match drama. Conor Whiteley got a goal in each half and was denied a hat-trick by the woodwork as Sholing ran out comfortable winners on a sunny day in Bristol.

Pre-match preparations were thrown into confusion when it emerged that due to a registration issue, we were unable to field a couple of players. This meant late changes by Marc Diaper to the line-up & formation, which now boasted 7 players making their competitive debut for Sholing.  It also left us light on numbers for the bench, as we were already missing Marv, Wagstaffe, Claudio & Greener.  Coach, Jack Smith, pulled on the boots just in case and although Rafa was listed, he's a couple of weeks away from being fit.  That left Jack Barnes and keeper, Luke Deacon.

On a gloriously sunny day in North Bristol, it was Sholing who started brightly and on 3 mins, Ryan Cluett whipped over an inviting cross that Luke Cope headed a couple of yards wide from the middle of the box.  Cope & Yumo linked up well on the left wing, with the latter being scythed down by the right back for a yellow card.  The Boatmen's pressure paid off on 21 minutes when we took the lead.  Joe Adams created space for himself on the right hand side of the box, delayed his shot a little, but still got off an effort that spun up in the air off a defender and CONOR WHITELEY positioned himself in front of the keeper to knock the ball in from close range.

Luke Cope was impressing with his movement and on 30 mins he cut in from the left to hit a 25 yard curling shot that he set out quite wide, but it came in a fair bit to go just wide of the upright.  Brad got himself booked for blocking the keeper from kicking out on 40 minutes.  He had a good chance soon after, but delayed getting his shot off first time and his eventual effort was blocked.  The home side were restricted to some long range shots that were well off target and some crosses that Gosney comfortably claimed. HT 0-1 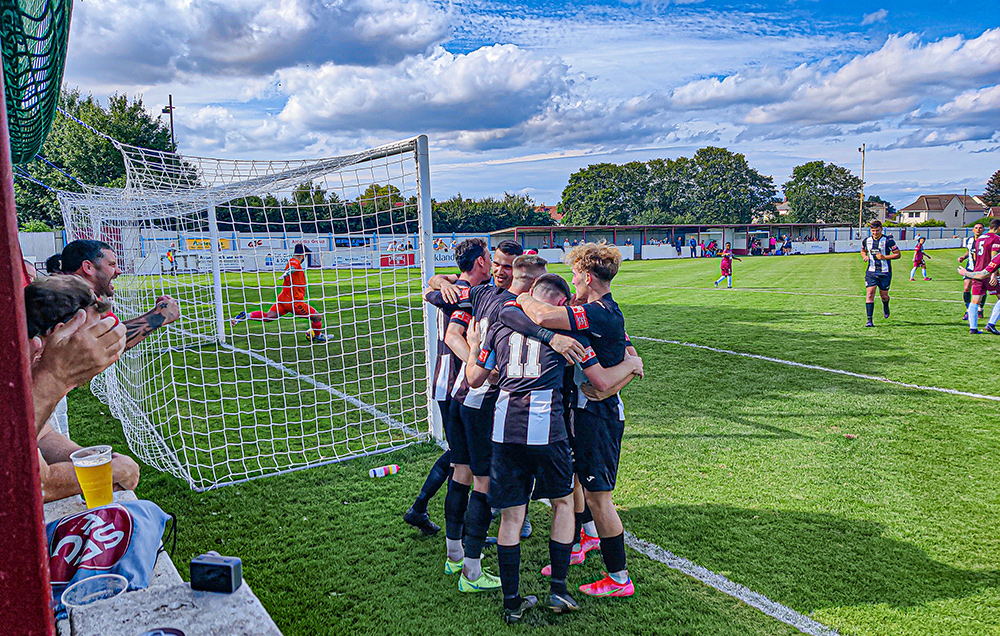 Sholing picked up where we left off and should have doubled the lead on 54 mins when Luke Cope's inch perfect cross into the box found Rob Nicholls arriving unmarked, but his shot cannoned back off the upright.   However, only 4 minutes later, the Boatmen had clear daylight when CONOR WHITELEY scored his and Sholing's second.  Once again, a good ball into the box by Cope found Brad Targett, whose scuffed shot fell nicely to Conor to spin and smash past the keeper from 12 yards, before celebrating with the Sholing fans behind the goal.

The home side were being comfortably kept at bay by the back three of Byron, Miller and Mitch, with the entire team putting in a good shift to close down and clear up, so it left Gos with one of the quietest games he's had and the clean sheet never looked in danger.

Conor Whiteley went agonisingly close to a hat-trick on 68 mins when he teed up the ball to hit with a spectacular overhead kick that smacked off the angle of post & bar.  That would have been some goal!  Jake Cope was penalised for what looked a clean challenge and in frustration, kicked the ball away and received a booking for that.    Sholing slowed the tempo for the last 15 minutes, keeping Mangotsfield at arms length & conserving energy for Monday's home game.  A good all round team performance and you'd never know that the side contained 7 players making their debut.  FT 0-2