James Lauder hit the only goal of a tight game, hammering home a spectacular 25 yard strike in the first half. It was Sholing's 4th win on the bounce, which catapults us up to a season's best 12th place

Team News: Jamie Bulpitt & Dan Miller missed out again, but there was a welcome return to Lee Wort, who took a place on the bench as Dave Diaper named an unchanged line-up from Saturday's win at Winchester.  Bristol Manor Farm arrived full of confidence after an impressive 2-1 win at league leaders, Thatcham, at the weekend.

Bristol Manor Farm started the better of the two sides, trying their luck with shots around the edge of the box early on, but they were put wide and into the side netting.  Boatmen's first dangerous attack came on 23 mins when Jake Hoole broke past the right back and whipped in a cross that was begging for a tap-in, but no one was there to capitalise.  Bristol almost handed Sholing the lead on 26 mins when Tovey attempted to nod the ball back to his keeper without checking where he was. He headed the ball over John, who had come out of his goal and it bounced onto the post and luckily for them, out of play.

Boatmen did find the net in the 37th minute and it was another brilliant goal to add to the list of recent quality finishes by the team.  JAMES LAUDER won the ball in midfield, made room for himself and smashed a 25 yard screamer that fizzed past the keeper's dive. A fantastic goal and probably even better than his memorable strike at Melksham last week.

The visitors almost got an immediate equaliser, winning a freekick on the edge of the Sholing box.  Leigh-Gilchrist beat the wall with a curling effort that smacked against the upright.  Stu Green was on the receiving end of a bad challenge that left him limping, with surprisingly, no caution dished out by the Referee to the Bristol player.  Right on half time, Brad Targett sped into the box from the right wing, but hit his shot narrowly wide of the near post.  HT 1-0

Ryan Gosney was called into action early in the second half, beating away a snap shot and he was busy again soon after, making a save, with the rebound somehow hit against the crossbar with the goal at the forward's mercy.  Stu Green was struggling with injury and was replaced by Lee Wort on 54 mins.

Manor Farm continued to hunt for an equaliser, with Leigh-Gilchrist going on a mazy run down the left channel, beating a couple of players, but eventually Sholing snuffed out the danger.   That continued to be the general flow of the half, Bristol going forward, but finding the Boatmen defence hard to break down.  Gos made another good save down at the foot of his post and although the visitors had several corners, they were either well claimed by Gosney or comfortably cleared.

Sholing might have grabbed a second goal late on when a cross from the right found Dan Mason with his back to goal about 10 yards out.  He connected well with a back heel that forced the keeper into a good reaction save.   Boatmen were able to run down the 4 mins of added time, with Wort & D-Dan holding the ball up in the corner before the referee blew the final whistle.

Bristol Manor Farm will feel hard done by to come away from the game with nothing. It's definitely a feeling that Sholing know well this season from several narrow defeats, so it's been pleasing to see us turn the corner and advance up the league table thanks to a hard working display, Lauder's great goal and our 2nd consecutive clean sheet.  FT 1-0 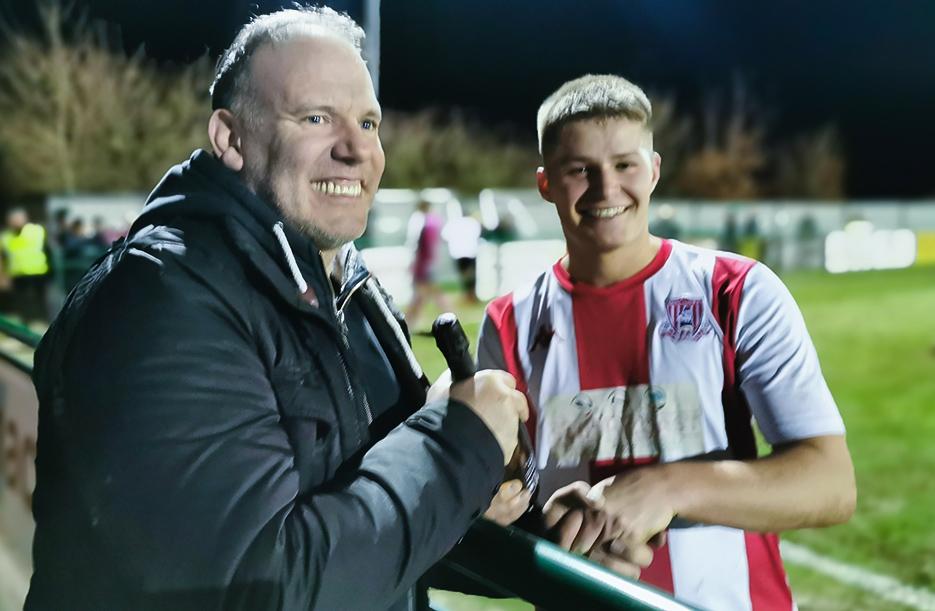