In horrible weather conditions Sholing played out a goalless draw against Buckinghamshire outfit Marlow at the Alfred Davis Memorial Ground. On a sodden pitch that got progressively worse with relentless downpours, the Boatmen had the majority of the possession, but didn’t convert into enough clear cut opportunities to force the win. The two sides must now contest a replay on Tuesday to decide who progresses to the second qualifying round of the FA Trophy. 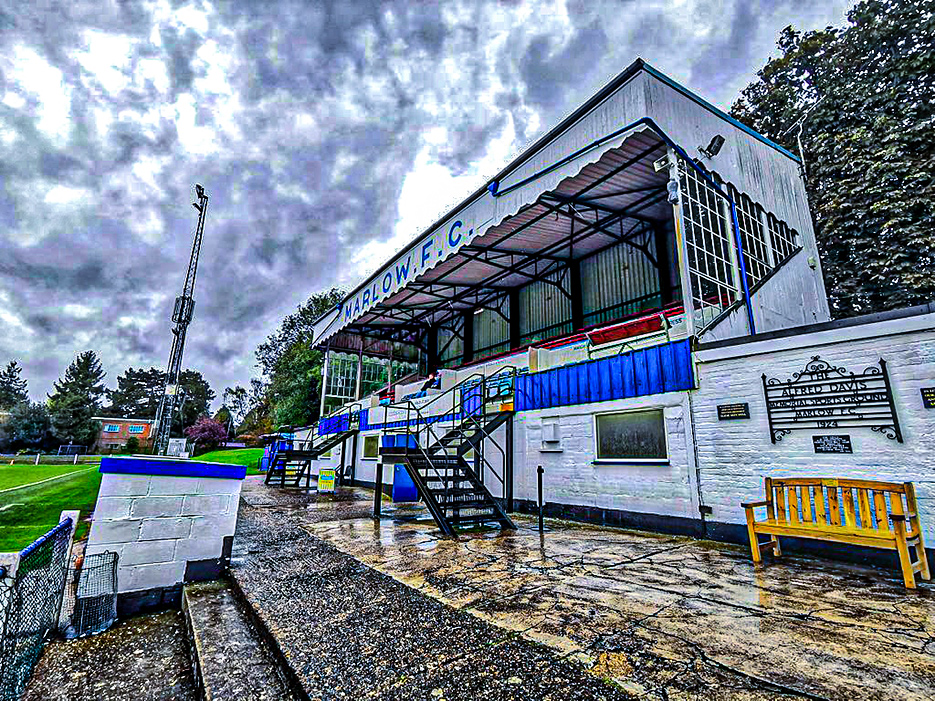 Team News: Sholing were without Ryan Gosney & Owen Royl, Luke Eaton dual signed from AFC Stoneham in midweek deputised for Gosney. Jake Hoole & Jamie Bulpitt made way for Owen Roundell and Alex Sawyer respectively and on the bench, Tobi Falodi & Jack Nicholas were recalled and Aaron Whitmarsh was called up from the reserves.

Sholing started the better and won a corner when Brad Targett’s snapshot was gathered on the by-line, before the linesman on the far side deemed the goalkeeper got a touch. The Marlow defence failed to clear the set piece and it was the winger who got a shot away. However the home defence blocked this low effort off the line cleared away for safety. Minutes later Stuart Green found himself in space down the right and floated a cross towards Dan Mason, which missed its intended target and Marlow keeper Simon Grant awkwardly parried the ball away from goal.

The home side looked dangerous on the counter attack with Jordan Brown being instrumental to their build-up play. He had Marlow’s best chance of the first twenty minutes when a Kelvin Bossman cross found him in space, but he miskicked his effort with the Sholing defence lurking. However both teams seemed to be struggling with the pitch, which led to the breakdown of several attack at both ends of the impressive old stadium. Crosses were often over hit with players in the area, which must have been as frustrating for the players as it was for the spectators, most of which took shelter in the historic grandstand.

The Boatmen created their best opportunity of the first half in the thirty-ninth minute when Dan Mason whipped in a delivery that found the arriving Stu Green, but his flicked effort cleared the crossbar from 8 yards. This was the last notable chance of a very even first half as both teams & the weather had cancelled each other out. HT: 0-0

After a quiet opening, the visitors created the first opening in the fifty-fourth minute when Stu Green got to the ball just before the keeper, but the ball spun out wide to Dan Mason who had his eyes on the open net in front of him, but as he shot, he was denied by a great tackle in his own area by Curtis Chapple. By this point the weather had turned into almost monsoon rain and the pitch seemed to be deteriorating rapidly. Also the desperation of both sides to get a foothold on proceedings led to mistakes all over the pitch as the game drifted towards the hour mark.

Marlow substitutions didn’t make an immediate impact and it was Sholing who created the next chance in the seventy-second minute after a lull in attacking play. Brad Targett was involved yet again down the left, finding Dan Mason to flick the ball back into the youngster’s path. Unfortunately the winger was leaning too far back and his effort was always rising for a goal kick.

Sholing were lucky to be spared a heart-breaking cup exit in the 86th minute when the home side broke forward from an over hit corner delivery by Alex Sawyer. Marlow winger Isaac Osei-Tutu found enough space on the left and hit a very low effort across the goal onto the base of the far post. The rebound fell kindly to Devontae Romeo who was lurking just inside the penalty area. However his effort saved by the legs of Luke Eaton, with the keeper putting in a solid performance despite his late addition to the squad this week, which meant he was only meeting his teammates on the day of the game.

The final minutes saw a flurry of half chances for the Boatmen as they pushed for a late winner in stoppage time. Alex Sawyer tried a tame side footed effort from the middle of the box when power was probably needed in the mud, before Dan Miller’s flicked header was gathered easily by Simon Grant.  There wasn't much between the sides and both will fancy their chances of winning Tuesday's replay. FT: 0-0