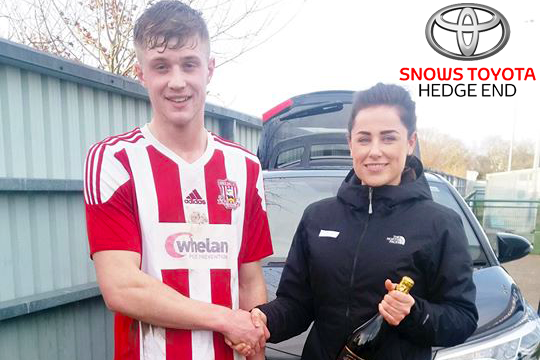 Sholing increased their winning streak to six games after a dominant display against Shaftesbury at the Universal Stadium. Lee Wort hit his 20th goal with his third brace in as many matches. Byron Mason, after making his 500th appearance midweek, hit his eleventh goal of the season. It made it a disappointing trip for the away side on their first ever visit to the Universal Stadium.

Team News: The team was reshuffled again following the midweek cup win over Newport. Jamie Bulpitt missed the game following his leg injury which required three stitches. Pete Castle was also missing through a knock. Dan Miller & Kevin Brewster were both away. So Frazer McLean & twins Liam & Jack Attrill were called up from the Development squad. Jake Hoole and Owen’s Royl and Roundell started.  Byron Mason filled in at centre back.

Sholing started brightly with Dan Mason firing high and wide from the edge of the box. Then it was Lee Wort who saw his first time shot go over the bar.  However, they were not to be denied for long as the home side took the lead in the 10th minute. Marvin Mclean skinned the right back, got to byline before cutting the ball back to LEE WORT, who got ahead of his marker to flick the ball across the diving keeper and into the far corner.

Once Sholing had taken the lead, Shaftesbury had a spell in which they should have scored. Firstly Adam Flint missed the target from close range after a great cross from the right, before Ryan Gosney pulled off a diving save after Nathan Connelly was through on goal.  Another chance for Shaftesbury came when Jordan Matthews shot wide with the goal gaping after good work by Adam Flint in space down the left.

This was the only spell in the game that Shaftesbury really looked like scoring as Sholing dominated possession and the chances as compounding Shaftesbury’s misery their captain Jack Vallis receives the first caution of the game. Jake Hoole appeared to enjoy his midfield position and he tried his luck from 25 yards, but the well struck shot went just over.

In the 26th minute, TJ Cuthbertson had a fierice low shot that was brilliantly tipped onto the post by goalkeeper Dan Card. On the half hour Lee Wort this time turned provider, but the Shaftesbury defender gets ahead of Dan Mason to prevent the Sholing striker adding to his goal tally. Sholing had two further chances before half time that were almost identical to each other. Alex Sawyer had two free kicks, which sadly missed everybody and dipped just wide of the far post. As half time came with Sholing in pole position Tom Cowley became the 2nd player in referee Carter’s book. HT 1-0

Sholing, mindful of the away game at Shaftesbury where they totally dominated the game, but were hit by a late sucker-punch equaliser, were determined not to let the same happen today and flew out the blocks from the restart, looking for a second goal.  Dan Mason has his effort cleared off the line in the opening minute. Also Shaftesbury lost their skipper Jack Vallis being replaced by Brandan Munday and Nick Hewlett taking over the captaincy.

Sholing had headers from TJ & D-Dan saved by the away goalkeeper from corners within the first 5 minutes of the half. However, the Sholing dominance at set pieces paid off as they doubled their lead on 53 mins. BYRON MASON was picked out by Alex Sawyer's corner, and the skipper had lots of space to plant a firm header from 10 yards past the keeper.

On the hour mark Jack Smith was replaced by Frazer McLean. Shaftesbury’s job was made even harder when Jordan Matthews was shown a red card in the 61st minute for seemingly kicking out at Ryan Gosney.  There was no complaints from his teamates about the decision as Matthews trudged off for an early shower.

Sholing could have made it 3-0 soon after with a shot from the edge of the box flying millimetres away from the near post. However, they did score their third in the 68th minute. Good work by Jake Hoole resulted in him beating two defenders and having a shot saved by Dan Card. The ball spun up to Frazer McLean who saw his looping header come off the underside of the bar with the ball falling nicely to LEE WORT to head in from a yard out.

The third goal killed the game as a contest and the last 20 minutes was an example of going through the motions by both teams. However, Sholing did have some half chances to make it 4-0. Substitute Frazer Mclean had a shot blocked by the defence, before Jake Hoole ran round the outside of the box but shot straight at the Shaftesbury goalkeeper. Then a final chance was missed when a counter attack was launched and TJ shot wide when through 4 on 2.  The win kept the Boatmen's unbeaten run going, backed by the ever-vocal Ultras and made it clean sheet number 22 of the season. FT 3-0