From the opening whistle Sholing pressed and dominated midfield which gave plenty of opportunities to open the scoring. Nick Yeomans had a great shot go just over on 8 mins and Luke Bergg was unlucky on 10 mins when he was put through with just the goalkeeper to beat, but the keeper saved with his legs. First team debutant from the weekend, Jack Hoole, was very lively all night and had chances on 28 and 30 mins. Andover never really caused Sholing a problem in respect of chances, Ibrahim Outlade was threatening up front, but he was well policed by Liam Attrill and the outstanding Keiron Winman in the centre of defence.  HT 0-0

The second half continued as the first left off for Sholing and more chances came that were we'll saved by Andover's Ben Woolhouse from Nick and Luke again, the best one being where he tipped over the bar a curling goal bound shot by Nick Yeomans. The intensity dropped from the hectic first half, not helped by a few interuputions to injuries to the visitors. Andover didn't have a shot on target all night, their best chance came on 65mins, but Keiron made an excellent interception from a cross which then went behind for a corner. FT 0-0

Extra time really showed the spirit and how much Sholing wanted the win and on 92 mins Jack Hoole broke on the right, cut in and unleashed a powerful shot towards the far corner that the keeper did well to save, but he could only parry to Nick Yeomans, who put it away to spark wild celebrations.

Jack Hoole continued to cause problems and had more opportunities to increase the lead, again with Ben Woolhouse tipping one of his shots over the bar. During the second period of extra time substitute Raheem Kelson was put through two times, but his runs weren't timed enough to keep him onside.  There were a couple of late corners for Andover, where they threw everyone up, including the keeper, but Jordan Brooks dealt with the crosses into his six yard box and Sholing celebrated the win.  FT AET 1-0

Sholing will be at home to League Two side, Newport County on Tuesday 3rd November 7:45pm 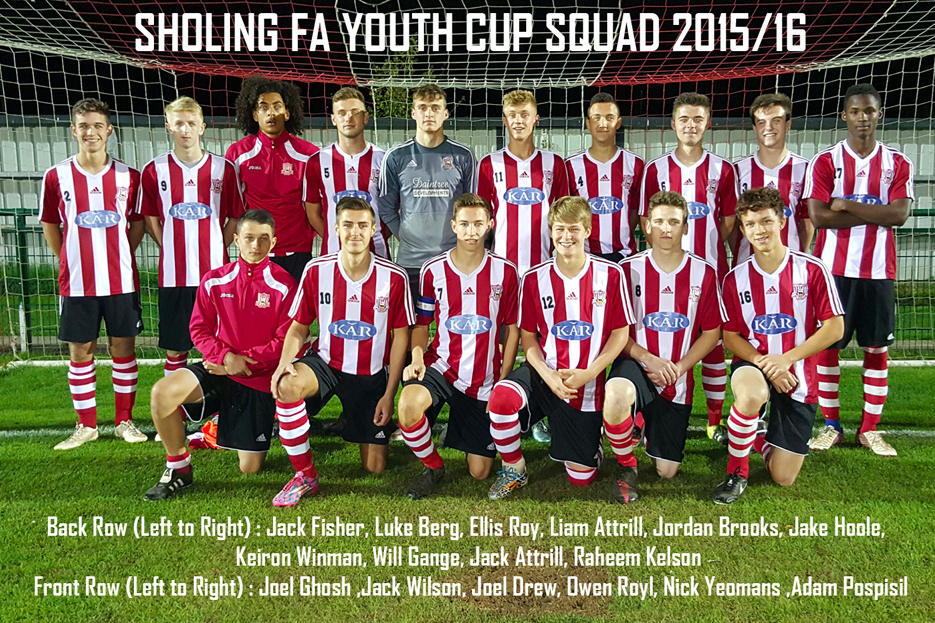 Sholing progressed into the 3rd Qualifying round of the FA Youth Cup with a convincing win at Wimborne.  Nick Yeomans got a brace, his first a lob over the keeper from 30 yards.  Wimborne equalised, but in the second half, the Boatmen scored 3 unanswered goals, including two in as many minutes by Jake Hoole & Luke Bergg.  We are now at home to Andover Town on Tuesday 20th October, 7:45pm.  The winner of that game, will be at home to League 2, Newport County in the 1st Round Proper

A very young Sholing side made an early cup exit to AFC Petersfield. Adrian Grijincu and Paul Gibbs' side were decimated with players being cupped tied and unavailable due to work commitments. Outfield player Jack Attrill (16) had to play in goal with seven 17 year olds, two 16 year olds and one 18 year old meant an average age of 18 lining up against some experienced players.

The youngsters started brightly and could have been 3-0 up inside the opening 10 minutes Luke Bergg had two efforts saved by Jordan Hiscock and Jake Hoole had his shot saved at the second attempt. AFC Petersfield won a corner and poor marking allowed Ryan Kennedy to beat Jack Attrill with his shot on 16 minutes. HT 1-0

Sholing had an early chance to get on level terms but Ryan Lambert put his shot wide of the Petersfield goal with Hiscock rooted to the spot.  On 61 minutes Sholing were undone by a swift counter attack a long ball out of defence sent Joe Twiddy clear on the left the centre forward cut inside and slide the ball past Jack Attrill into the far corner of the net. Ashley Fooks was always a danger on the right and was being marshalled well by Sean Tollervey, however on 85 minutes the forward was adjudged to be fouled in the area and referee Robinson awarded the penalty which Joe Twiddy converted. FT 3-0

Sholing fought off a second half comeback from the visitors after we were reduced to 10 men. Sholing dominated the first half and took the lead when Tobi Adekunle ran through and fired a low shot that the keeper tipped onto the inside of post and in.  The second goal came a couple of minutes later when Lukas Sabo measured a curling shot past the rooted goalkeeper from 20 yards.  The third was via a near post header by Victor Odeyemi from a corner.  Should have been four up at half time, but Tobi Adekunle had a penalty saved.  HT 3-0

The second half was more of the same, with Luke Bergg hitting the post and missing two other good chances.  Macaully Smith also went close, but out of very little, Dorchester got back into the game.  Victor Odeyemi blocked a shot at point blank range on the line. No Dorchester player appealed for a penalty, but the referee deemed it was handball and rubbed salt into the wounds by sending Victor off.  The penalty was scored and then 3 minutes later, a Dorchester player fired into the top corner from 25 yards.   Suddenly, Sholing had a game on our hands, but we still managed to create chances, with Tobi putting some good crosses into the 6 yard box, but no one could convert. FT 3-2

Luke Bergg scored a dramatic injury time winner to put Sholing through to the next round of the FA Youth Cup.  It was no more than the Boatmen deserved as they dominated most of the game and created the clearer chances.  Salisbury were limited to a couple of long range shots that Jordan Brooks dealt comfortably with.  Bergg had a couple of early chances well saved, but from half time onwards, it was almost one-way traffic towards the Salisbury goal. After missing a couple of sitters and with the game looking like it might go to extra-time, a ball over the top saw Bergg in a race with the keeper and he got there just ahead of him to clip it into the empty net.

Sholing will now travel to Wimborne Town in the next round on Wednesday 7th October 7:30pm. Admission, Adult £2, Concession £1, U16's free

The Development Squad's first game of the season looked set to be a victory, until a last gasp equaliser.  Sholing had 5 new faces in the starting line-up after the usual summer turnover of players.  Sholing started the brighter and were getting the ball down and knocking it around on the lush Silverlake Arena pitch.  First chance came when Connor Bloomfield picked up a stray ball and from 25 yards curled a shot that looked to be heading in, until the Winchester keeper got a fingertip to deflect it onto the inside of the post and it somehow stayed out.   Cain Prentice went close and then Tom Hawkins broke through, but his effort looped up off the keeper and landed on the top of the net.  However, on 41 minutes, we went in front when Callum Parker tried his luck from 22 yards and despite the keeper getting a hand to it, he couldn't stop it flying just inside the post.  HT 1-0

Sholing pushed for the second in the early stages of the second half.  We were dominant in possession and a nice move ended with Cain Prentice flashing a shot on the angle across the face of goal and inches wide.  Winchester reorganised their defence and started to get more control.  However, only had two serious efforts on goal to show, a shot that went just over and a breakaway that the striker pulled horribly wide.  There were no stoppages in the second half apart from substitutions and in the 5th minute of added on time, a Winchester corner was met at the far post for the equaliser.   Typically, the ref blew the final whistle straight at the restart.  Hard on Sholing, who deserved a win, but some encouraging performances against one of the stronger sides in the Division and some good football played.  FT 1-1