Man of the Match: Jean-Luc Ramdin 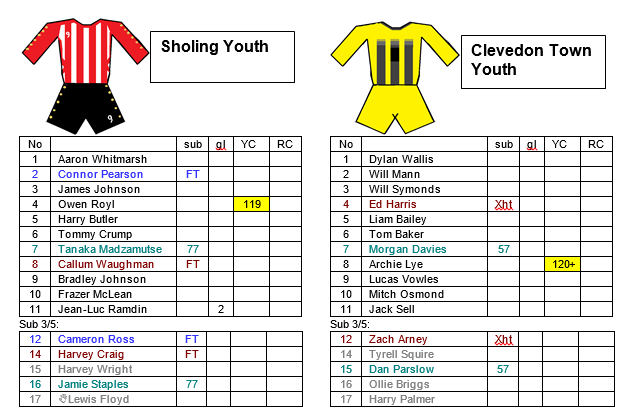 Sholing U18's made club history by progressing to the Second Round of the FA Youth Cup for the first time, thanks to two spectacular goals in the second period of extra time by Jean-Luc Ramdin.

Sholing were the more attacking side in the early stages with Town keeper Wallis being kept busy by making fine saves from two Brad Johnson efforts and later the Sholing striker, having picked the pocket of a visiting defender, dragged his shot wide.  Owen Royl made a fine run into the box that took him past two Clevedon players and he was unlucky when his shot from the right-hand side of the box which came off the foot of the far post.

Sholing were playing some neat passing football and a good move with Ramdin and Brad Johnson involved, resulted in a McLean shot being saved fairly comfortably by Wallis.  Meanwhile, Sell for Clevedon made a good run into the Sholing penalty area but failed to test Whitmarsh with his finish.  A Royl free-kick was placed deep into the visitors box in first half stoppage time and Town defender Bailey got his head to it, forcing his own keeper Wallis to make an excellent tip over the bar, with the keeper colliding with his post in the process.  Sholing were on top overall but it was goalless at half-time.  HT 0-0

Sholing continued to attack early in the second half but following a fine passing move involving Waughman, Ramdin, Brad Johnson and McLean, the ball was returned to Ramdin who miskicked his finish and the chance was lost.  That was followed by a Butler header from a free-kick that went wide.  Sholing had a great chance to score when Ramdin’s shot was saved by Wallis and it fell to Brad Johnson, who with the goal gaping, hit his shot off the top of the crossbard.

Ramdin got a further shot in but it was well blocked by Town defender Mann to concede a corner.  Clevedon had posed no more than a mild threat on the Sholing goal but they had a perfect chance to net what could probably have been an 88th minute winner as hesitancy in the Sholing defence enabled a left-wing cross to get to Vowles in space but his shot came off the post; the Clevedon striker, by his reaction, knowing it was a decent opportunity. FT: 0-0

The air was feeling decidedly colder as extra time commenced.  Sholing sub Ross tried a shot from wide on the right which hit the top of the rigging and McLean drove over.  Into the second period of the extra half-an-hour and Vowles shot wide for Town and Ramdin was in a good position in the box and appeared to take the wrong option by passing and the eventual shot was blocked.  An Arney pass to Osmond produced a fine block from an alert Whitmarsh in the home goal.

The healthy 227 crowd had to be patient, but most of them were rewarded in the 113th minute when a long throw into the box was flicked on into the path of JEAN-LUC RAMDIN about 15-yards out and he lashed an unstoppable volley into the roof of the net.  Town tried to hit back but headers by Vowles and Parslow missed the target when both were well placed.  It was all over in the final minute when under pressure, the Clevedon keeper rushed his clearance and it fell to JEAN-LUC RAMDIN, 25 yards out on the right side and first time, he hit a precise shot across the stranded keeper and into the far corner to spark wild celebrations. FT AET 2-0

It was a decent game and the right result.  Sholing, into Round 2 for the first time, now travel to the winners of the Leyton Orient v Biggleswade Town tie.