On Tuesday 28th August, when Sholing travel to Tadley Calleva in the Wessex League Cup, Dave Diaper will be managing the team for the 1000th time.   Here we look at "Diapes" record at Sholing in the 19 years he's been in charge at the Boatmen.

Message from Diapes : "I would like to thank everyone for their best wishes and kind comments on reaching 1000 games in charge of Sholing FC."

"It has been a journey with more highs than lows and I feel a sense of accomplishment, which has been made easier by being surrounded by top people, who like me, are dedicated to this great football club."

"I have been fortunate to manage many players throughout my tenure at Sholing including the present squad and I would like to thank them all for helping Sholing FC to sustain it's position of being one of the areas most high profile Clubs." 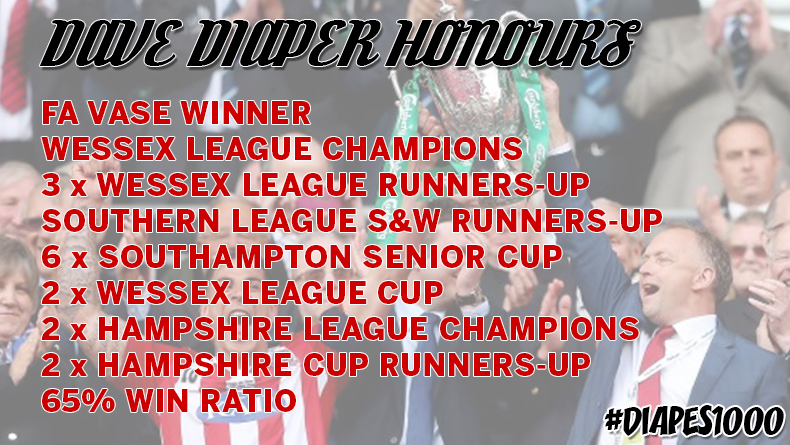 Previous Management Roles : Diapes managed at Otterbourne & B.A.T. before joining Vosper Thorneycroft FC (as we were known back then) for the 1999/2000 season.  He was persuaded to join the club by Trevor Lewis, Bill Boyle and Arthur Fox, who for many years had guided the reformed Vospers from Southampton Junior League to Hampshire League, but needed to make the next step to grow it further.

Took Dave just two season's to gain his first silverware, as Vospers were crowned Hampshire Premier Champions in 2001.  The following season, the club (now renamed VTFC) lifted the Southampton Senior Cup at St Mary's and in 2003/04, Vosper's did the double by winning the Hampshire League and Soton Senior Cup and earning promotion to the Wessex League for the first time in the club's history. 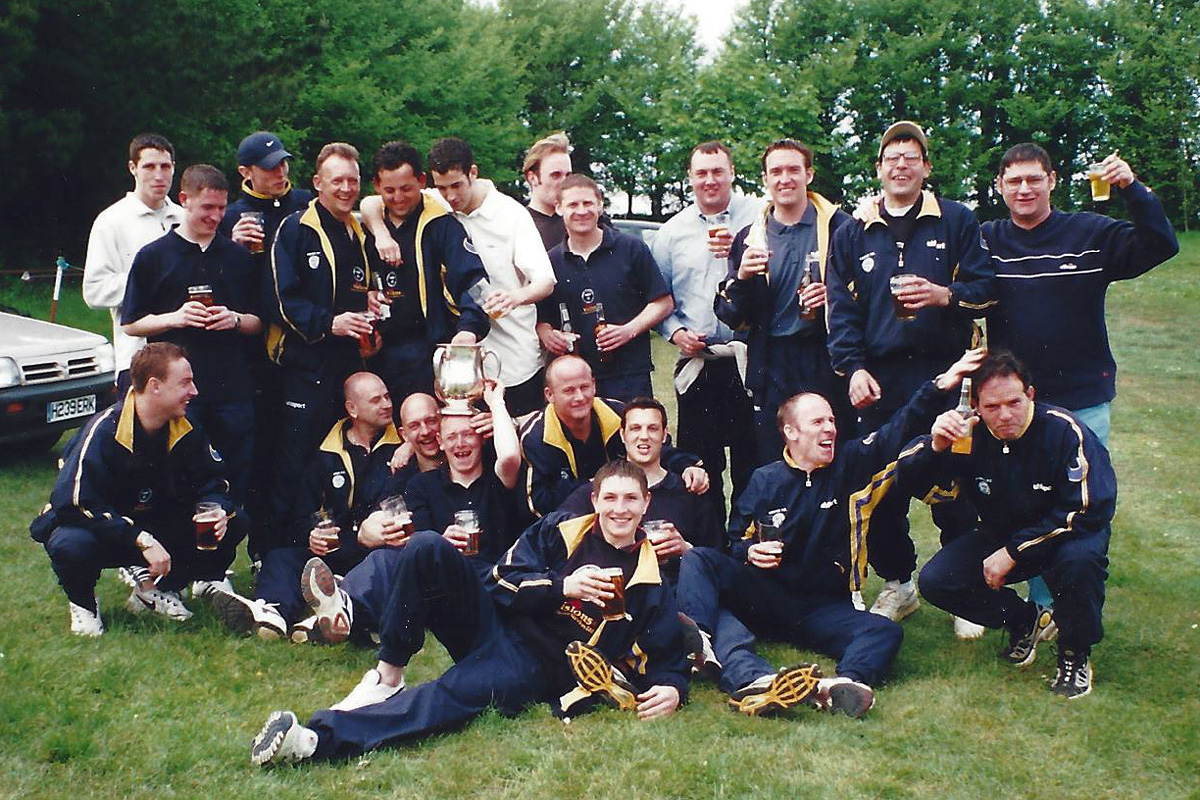 This heraled a period of growth in the club on and off the pitch as in partnership with VT, ground improvements were made and Diapes attracted some quality players to the club, many of which had played at a higher level, such as Ryan Ashford, Tyronne Bowers, Kev Brewster, Kevin Gibbons, Lee Bright, Barry Mason & Paul Sales.  However, Dave balanced the squad of experienced heads with a growing list of youngsters who came through the club's Youth & Reserve teams, such as Marv McLean, Byron Mason & Lee Wort, as well as snapping up nippers who had been recently released by Saints Academy, such as Matt Brown & Mike Carter.

VTFC had some ding-dong battles with Poole Town in the Wessex League before gaining promotion in 2009 to the Southern League, the highest level the club has played at. In 2010, with VT no longer based in Woolston and soon to not exist as a company, meaning financial backing was set to reduce, the decision was made to rename the club. "Sholing FC" was the name selected to reflect the nearest Southampton suburb to the ground on Portsmouth Road.

In 2010/11, Sholing went agonisingly close to promotion to the Southern League Premier Division. After finishing runners-up behind AFC Totton, the Boatmen won their first play off game against Thatcham Town, to face Frome Town in the final, which was played at our ground.  Frome edged the game by a single goal to gain promotion at Sholing's expense.  It was a similar story the year after, the Boatmen finished 4th, but lost in the first play-off game to Gosport Borough.

After a strange season in 2012/13, where the club was bottom at Christmas, but then went on an unbeaten run that saw us finish 7th, the tough decision was made to take voluntary relegation.  With the VT legacy payments ending, the club had to become self-financing and the costs of both travelling & doing ground-grading work would have pushed the club into the red and Diapes has always insisted that he would not allow Sholing to go bust in the same manner that several other local clubs had done.

Back in the Wessex League in 2013/14 and Sholing go unbeaten until February and will go onto the win the Premier Division with 104 points and a goal difference of +105.  However, 2014 will always be remembered for the incredible FA Vase run and victory at Wembley.  On the 19th of October, away at Winchester in the First Round, no one was even dreaming of a "March to the Arch" as the Boatmen scrapped a 1-0 win.   Perhaps it wasn't until the 5th round that Diapes and the players started to think that "our name's on the cup" when we were outplayed at home by Larkhall, but won the game in extra-time.   Was a similar story in the Quarter Final, squeezing past Wisbech Town, with Lee Wort once again getting the only goal.

The Semi-Final first leg against Eastbourne United was a thriller, Sholing went in front, but the away team equalised and grabbed the lead. Mike Carter got a late equaliser to make it all square for the second leg.  In that game, the Boatmen blew away Eastbourne, scoring 3 unanswered goals in the first half and despite a rally in the second half by the home team, the Boatmen secured their place in the final at Wembley Stadium!

There was a whirlwind of activity for Diapes ahead of the final, with media days, new kit and suits to organise as well as all the the travel & accommodation arrangements.  Dave has often said the proudest moment of his football life was leading his team, containing his son, Marc, out the Wembley tunnel and standing on the hallowed turf as the National Anthem was played. The Final itself reflected some of the earlier rounds as Sholing had to stay strong and organised against a good West Auckland side.  However on 71 minutes, Lee Bright released Marv McLean who beat the defender to the ball and scored to send the 3,000 Boatmen fans delirious.   Sholing withstood a late bombardement with Matt Brown pulling off several great saves before the final whistle and the dream, had become a reality.   Diapes lifted the FA Vase with Captain, Byron Mason and the celebrations went on and on and on ! 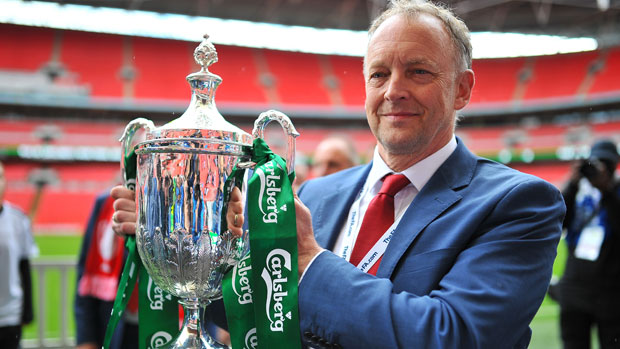 When the dust had settled, off the pitch, Diapes had worked hard to get planning permission approved by Eastleigh Borough Council for a new clubhouse and 3G training pitch.  The grants appeared to be in place to fund it, so the club accepted promotion back to the Southern League South & West.   Diapes, decided to step down as Manager to focus on getting the redevelopment pushed through.   Sadly, both on and off the pitch, it was to be a year of disappointment, after the highs of Wembley, the Boatmen had a poor season and were coming up against more and more hurdles with the redevelopment.   Diapes took back management of the team, but after conflicting ground grading reports, the club was told it had to spend money it simply did not have, on improvements to stay in the Southern League.  Faced with spending money on facilities the club, at that time, had plans to demolish, Diapes and the Committee again took voluntary relegation back to the Wessex League.

Back in the Wessex League and with the club now fully self-financed by generous sponsors such as BSA Regal, Dansach, Universal Plumbing and Powerplus, as well as gate receipts and fund raising activities, Sholing finished in the top 3 for the next 3 seasons, but also had the highlight in 2017 of winning two cups in the space of 3 days. Firstly the Wessex League Cup and then the Southampton Senior Cup at St Mary's, lifting that cup for a record 8th time.

Sholing made it on national TV in 2018 when Budweiser surprised us with a hugely generous £100k grant to go towards a new clubhouse. Since then, Diapes has once again been spending a lot of time on the club's behalf attending meetings with the FA & Contractors to progress a redevelopment.  To his credit, he continues to try to get this over the line and we are hopeful of the club finally getting the facilities it deserves in the near future.

Dave Diaper continues to be "Mr Sholing" and with his support and guidance, helped by the hard work of club volunteers, Sholing has more Youth Teams than ever before, pan disability sides and a Ladies Team.   Dave takes great pride in giving young players a chance and in recent seasons, dozens of development squad players have made their debuts for the first team, with several such as Owen Roundell, Owen Royl & Jake Hoole, now firmly establish in the squad.

For any manager to reach 1000 games for their club shows a huge commitment by them, probably even more in non-league where you have to fit football round work and family life.  This was highlighted a couple of years ago as Diapes came through a cancer scare, something he kept to himself for a long while.

It's perhaps the measure of the man that so many players stay at Sholing because Diapes is such a good manager to play for and creates an atmosphere and team spirit the envy of other clubs.  The Current squad has 4,000 games for Sholing between them, once a Boatmen, always a Boatmen!  In that time he's been helped behind the scenes by close friends, Gerry Roberts, Kev Harnett & Mick Brown, as well as the support of son, Marc, daughter Claire and wife, Helen.

Many thanks to Dave Diaper for all he does for Sholing FC and reaching 1000 games and here's to many many more! 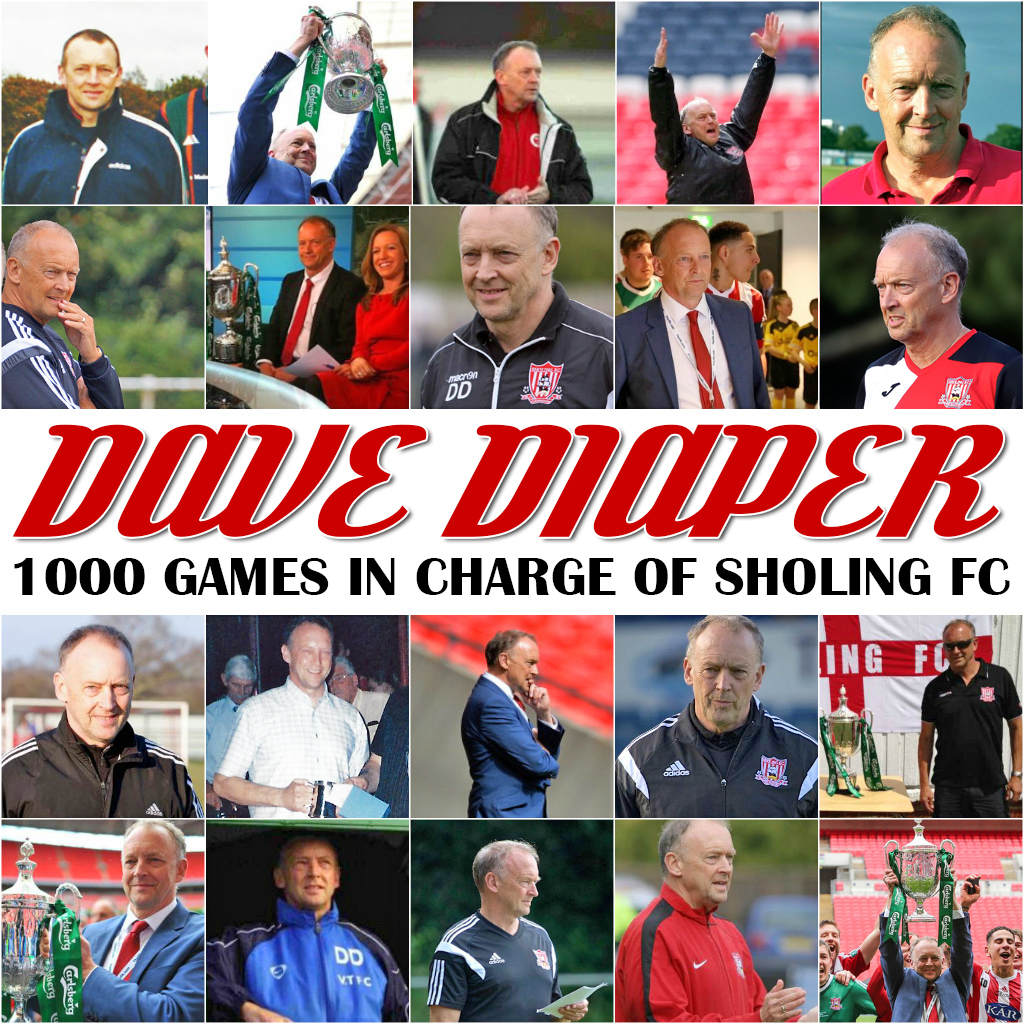