Man of the Match : Rob Nicholls

A business-like performance by the Boatmen saw them advance in the FA Cup against Wessex Premier side, Alton. Dan Mason bagged a first half brace before Alton scored from the spot.  Second half saw a lot of Sholing pressure rewarded with Stu Green's cool finish and the Boatmen were able to control the rest of the game to avoid any dramas.

It was Marv McLean's 700th game for Sholing and he was given a guard of honour by both sides onto the pitch before kick off.  In his usual humble manner, Marv was probably more interested in getting the game won than any personal milestone, but such an achievement is rare these days in football at any level and no one deserved the applause more. 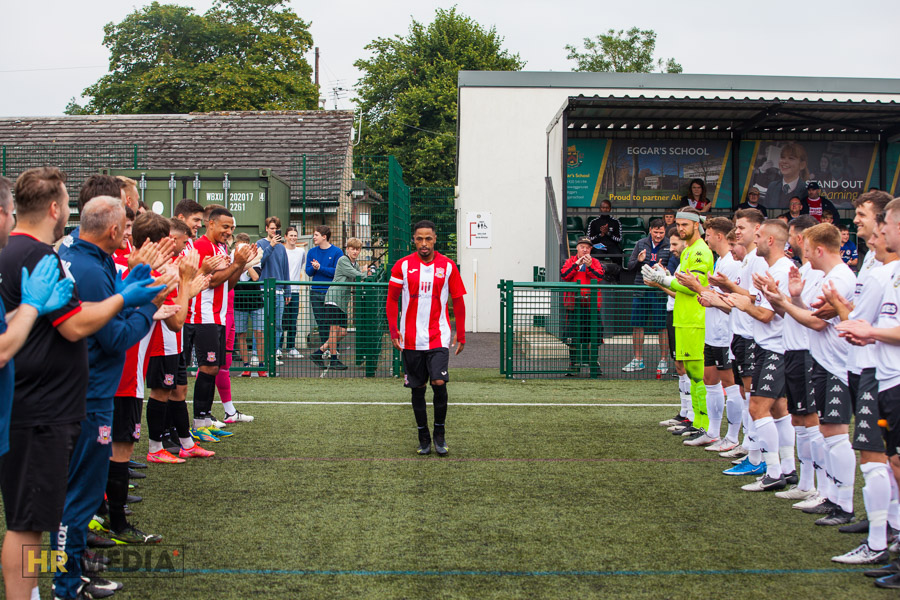 Dave Diaper had everyone, expect skipper Byron Mason, available today. Byron is hopefully very close to being fit again.  Marv took the armband in front of a very big crowd at Anstey Park on a muggy day as the game got underway on the 3G surface.

Sholing had the first half chance when Stu Green's hooked effort went wide. Up the other end and Alton created space for a shot on the edge of the area, but is was slashed towards the corner flag.  On 10 mins, the Boatmen took the lead when Brad Targett's low drilled in cross from the left was met by DAN MASON to knock the ball under the keeper from close range.  D-Dan didn't have to wait long for his second.  On 22 mins, Stu Green's powerful shot was pushed away by the keeper and put behind by a defender for a corner. Ryan Cluett swung it in and an unmarked DAN MASON met it with a downward header past the keeper.

Ryan Cluett's set piece delivery was to cause Alton problems all game and another corner picked out Dan Miller, who's looping header was claimed at the second attempt by Greene in goal.   The home side looked lively going forward, moving the ball around quickly on a surface they are familiar with and on 34 mins, Brad was suckered into dangling a leg, with the referee awarding a clear penalty.  Matt Graham thumped in the spot kick to give Alton hope of a comeback.  With the crowd behind them, the home side did put Sholing under pressure, but Gosney was there to deal with a couple of half-chances.  Boatmen probably should have extended their lead with the last move of the half when another Cluett delivery found Stu Green in a lot of space 10 yards out, but he nodded wide.  HT 1-2

Sholing looked determined to put the game to bed early in the second half and created several chances before scoring their third.  Firstly Conor Whiteley's cross to the far post was inches ahead of Dan Mason, then Brad Targett's powerful header was tipped onto the crossbar with a good save by Greene.  Dan Mason should have been celebrating a hat-trick on 50 mins when once again, Whiteley's clever ball into the box saw D-Dan run from behind his marker to score, but to his and his teammates astonishment, the linesman had his flag up for offside.   Conor Whiteley then had the keeper scrambling down to his near post to push a plastic daisy cutter round the upright.

Boatmen's intense 10 minutes of pressure was rewarded on 55 mins when Joe Adams glided forward in midfield to slide the ball into the feet of STU GREEN to advance and beat the keeper with a cool finish high into the net.   Alton didn't let their heads drop, but once again, some wayward shooting didn't match their build up and Gosney was comfortably equal to a couple of long range efforts.

Sholing slowed the tempo of the game, not allowing Alton to build any momentum, with Robin Nicholls reading and pre-empting any danger with a number of interceptions and great tackles in midfield.  A goal for Alton would have made for a dramatic finish, but you never got the feeling it would come as the Sholing defence shut things down.  Boatmen might have grabbed a late fourth, but Claudio Herbert's shot was off target.

It was job done by the lads in red & white and the final whistle saw Sholing bag £2,250 from the prize fund and go into Monday's draw for the Second Round Qualifying with the games being played in two week's time on Saturday 18th.   FT 1-3

Thank you to Alton for their hospitality and good luck for the rest of the season. Many thanks to the Sholing fans for backing the lads today.