Man of the Match : Marv McLean

With the odds against us, the Boatmen defeated Cirencester Town, who up to that point had a 100% record and hadn't conceded a goal in the league.  A determined and hard working Sholing kept the home side's attempts at goal to a minimum, whilst creating the better openings, scoring two late goals through Brad Targett & Marv McLean to gain an impressive win.

Team News : Dave Diaper was without TJ, PJ, Jake, Greener, Sawyer & Wattsie, so had to restructure his starting line-up, with Joe Smith coming in at right back and Byron dropping into defence, with a midfield of Roundell, Waggs, Claudio and the returning Jamie Bulpitt.  Leaving Brad to support Dan Mason up top.  After letting several players join Wessex clubs to get game time, it meant a couple of U23's received late call ups to the bench, with Roberto Salvati & Jamie Kaffo joining the squad for the first time in a competitive match and two keepers on the bench, although Michael Kurn was kitted up as an outfielder.

The game started in cloudy skies and a chilly wind, but soon warmed up when the sun broke through on Cirencester's 3G pitch. Sholing almost got off to a perfect start when on 2 mins, Dan Mason got past his marker to fire a shot towards the far corner, which the keeper managed to palm out and the rebound was just at an awkward height for Targett to get a good connection on.

The home side came back into it and had most of the possession for the next 20 minutes, but without worrying the Boatmen defence.  However, on 27 mins, Cirencester switched the ball from the left to the right channel to play in Anderson with a clear sight of goal, his shot beating Gos, but also flashing wide of the far post.  After several 50/50 challenges were given in favour of the home side, it prompted Micky Travers to shout out something about Basketball that was quite confusing.

More Cirencester attacks were mopped up by our defence and Gosney, before Dan Mason had a decent chance, when a back header by a defender went beyond his keeper, but on a tight angle, D-Dan hit the ball first time toward the unguarded net and sadly into the side netting.  On the stroke of half time, Claudio went into the book for nicking the ball off the keeper after he had thrown it up to kick.  HT 0-0

Dan Mason showed good control to bring down a ball on 50 mins, but his powerful shot went narrowly over. The Boatmen were working very hard to quickly close down the home team and limit their attacks to long shots that were off target.  One shot that was definitely on target came on 71 mins from Sholing. Marv crossfield pass picked out Dan Mason who teed up a vicious scissor style shot that was brilliantly finger-tipped onto the crossbar by Dan Lawrence.

With a succession of rainbows framing the outskirts of the stadium, with the rain thankfully just missing us, Cirencester's best chance of the game came from a freekick on the right edge of Sholing's area. It was whipped in at pace by Dennis into the 6 yard box where Grace-Parsons met it with a glancing header that brought a superb reaction save by Gosney.

Sholing, perhaps, could have seen out the last 10 minutes to get a valuable draw, but why get the 1 when you can get the 3 ?!  On 80 minutes a through ball on the half volley by Dan Mason put BRAD TARGETT clean through and as the keeper came out he coolly rolled the ball beyond him and inside the far post, before pulling a somersault celebration out of the bag!

The win was secured with 5 minutes to go when MARV MCLEAN collected the ball on the left and his curling "cross-cum-shot" floated perfectly over the keeper and right into the far top corner.  It may have been a bit fortunate, but no more than Sholing deserved for a hard working team performance and probably one of our best ever on a 3G surface.  Before the match, it looked an uphill task to face the league leaders with so many players missing, but you write the Boatmen off at your peril. Great confidence boost ahead of the big FA Cup game on Tuesday.  FT 0-2

Dave Diaper said : "Another good away day for Sholing and good value for our 2-0 win over a very good Cirencester side. Well done boys!" 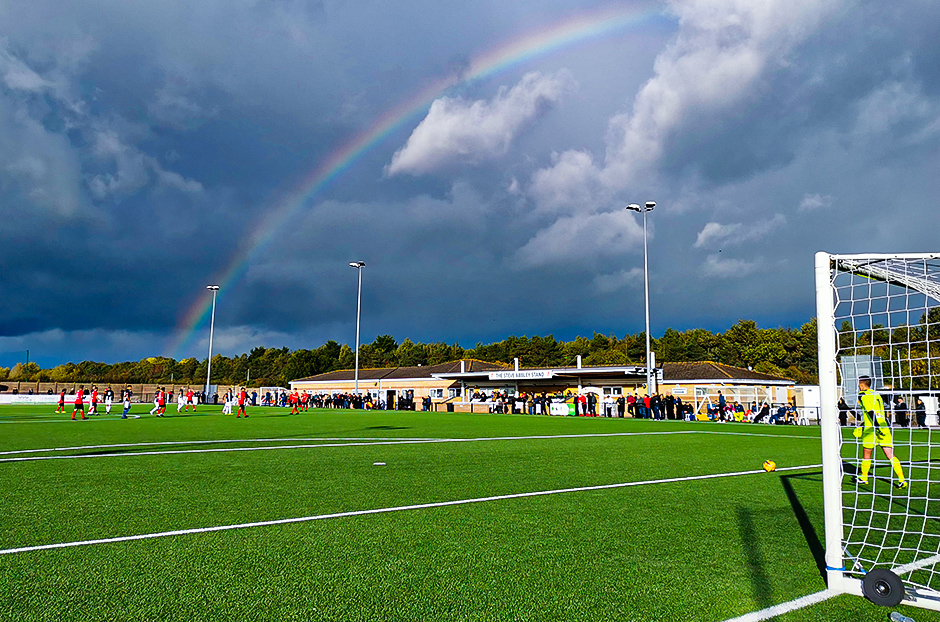