Man of the Match: Dan Mason

Dan Mason smashed a hat-trick as the Boatmen advanced into the 3rd Qualifying Round of the FA Cup. D-Dan opened the scoring with a typical classy finish and doubled it with a penalty before half time.  The home side scored from a spot kick of their own, but Dan wrapped up the win with another great finish to send Sholing into Monday's draw.

Team News : Dave Diaper kept an unchanged starting line up from midweek, but Nick Watts missed out through injury.  Saltash may have been the lowest ranked team left in the FA Cup, but up to this point, they had been the giant killers of the competition, beating 3 teams from above them, including Paulton & Cirencester from our division, so were not to taken at all lightly.

After leaving the Mackoy Stadium at 8am in a deluge of rain, the team made the long trek down to Cornwall, where thankfully most of the heavy rain had not fallen, although there was a very blustery wind blowing down the length of the pitch.  After an even start, the Boatmen took the lead on 11 minutes when Charlie Wagstaffe won the ball on the half way line, fed Claudio Herbert who advanced and picked out DAN MASON just outside the area and D-Dan smashed the the ball low into the far corner for a great goal.

Saltash had a chance to equalise, but a shot in a good position was pulled wide of the near post.  There was a blow to the Boatmen when Wagstaffe clashed heads and had to go off with a bleeding nose. Owen Roundell came on to join Byron in the middle of the park.   Sholing doubled their lead just before half time when following a corner, a long throw into the box saw Dan Mason tap the ball back to PJ McLean who was fouled in the motion of shooting.  DAN MASON firmly shot home the penalty just inside the left hand post.   HT 0-2 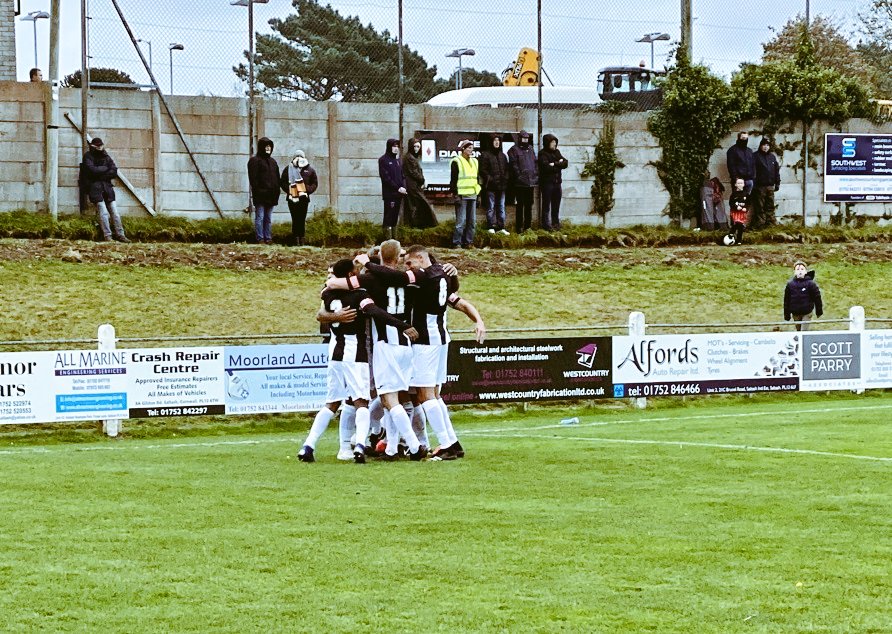 Diapes had to make another enforced change for the restart, with Joe Smith replacing the injured TJ Cuthbertson and slotted into the right back position.   Now with the wind at their backs, Saltash threw bodies forward and following a scramble in the area, the referee pointed to the spot.  Saltash captain, Dave Barker slotted home the penalty to get the home fans well behind the "Ashes".

Saltash won a succession of corners and freekicks, but the Sholing defence held firm, clearing everything that came at them with Gosney also doing well to both claim and tip some swirling crosses over his bar.  Boatmen weathered that storm and extended their lead when a long clearance by Gos, was brilliantly volleyed, first time, by Jake Hoole into the run of DAN MASON, who shrugged off his marker, rounded the keeper and slotted the ball into the empty net for his 226th goal for the club and his 12th hat-trick.

Remainder of the game, saw Saltash not let their heads drop and continue to press forward and win corners and freekicks, but they couldn't find their way past a well organised and hard working Boatmen team performance as Sholing avoided the banana-skin and advanced into the 3rd Qualifying round, to match as far as the club has ever gone in the FA Cup.   FT 1-3

Dave Diaper said : Great performance in the FA Cup against a very good side Saltash United. No way a Step 6 Club. We had to be at our best both mentally and physically to get through. I don’t very often go public with praise for my Sholing Boys, but give credit where it’s due, well done lads, including those who didn’t get on, great attitudes to a man. Thanks to Saltash for the hospitality and good luck for the rest of the season.

Chairman, Gerry Roberts said : A massive thank you to everyone who travelled down to Saltash today. The boys did us proud against a very good side. Our supporters were a credit to the club. Many thanks to everyone at Saltash United who looked after us fantastically. The boatmen march on! Let’s Hope we get a favourable draw on Monday