Man of the Match: James Lauder (fans choice, but a tough call, with all players excellent)

A top drawer performance by Sholing saw them upset the in-form team in the league with a resounding win.  Melksham were unbeaten in 12 games, winning the last 9, whereas the Boatmen came into the game with a poor away record and missing several players, but put in a high intensity performance, playing some lovely football to full deserve an impressive 3 points.

Team News: Dave Diaper was without TJ & Lee Wort, whilst Dan Miller & Jamie Bulpitt were nursing injuries on the bench.  19 year old Joe Smith made his league debut at right back, with Byron partnering Owen Roundell in central defence.  There was a first call up to the bench for 18 year old James Hall.

Sholing's first visit to Melskham Town's hugely impressive new stadium. A real bench mark for modern non-league grounds (similar in layout to Slough Town's), with all the facilities that a club at our level needs to grow on and off the pitch.  Speaking of pitch, despite recent heavy rain, the playing surface was excellent.  Before the game, Melksham's manager picked up the Southern League Club of the month award and a glance at the league table, put the 5th placed team as big favourites against the 17th placed Boatmen.

A bright start by Sholing saw them knock the ball around with purpose in the opening moments and got their reward after just 10 minutes.  A right wing corner was swung into the near post where the keeper dropped it and DAN MASON pounced quick as a flash to prod it into the net.   Two minutes later and it was almost a second as a lovely through pass by Byron set Stu Green free on the left, who spotted Brad Targett in the middle of the box, but he was inches away from connecting with the cross.

It continued to be all Sholing going forward, winning 3 corners in a row, with good deliveries causing Melksham lots of problems.  Boatmen won another corner on 21 minutes and doubled their lead.  Stu Green's corner was cleared out, but Jake Hoole swept the ball back out towards Green, who did brilliantly to connect with a controlled volleyed cross that was perfect for OWEN ROUNDELL to powerfully head past the keeper from 6 yards.

Stung by the scoreline, the home side had a spell of pressure which resulted in them getting a goal back in the 35th minute.  A cross from the left was headed back across goal where Gosney saves the first effort, but despite his best efforts to save the follow up, Luke Ballinger's effort just evades him.  The home side had their tails up, but Sholing didn't panic and carried on playing as they had done from the start. Lots of energy & good movement up front and through midfield, with Dan Mason bossing the centre halves.  Two minutes before half time and the Boatmen scored a lovely third goal.  Some neat approach play, saw the ball controlled by D-Dan, who layed it off to JAMES LAUDER as he ran into the box, making space for himself before smashing a rising shot from 15 yards that gave the keeper no chance.  HT 1-3

Everyone watching were expecting Melksham to come storming at Sholing after the restart, but it was the Boatmen who scored early to kill the game off.  On 50 minutes, a long throw from the right wing into the box was flicked on by Dan Mason towards STU GREEN who sniffed out a chance, getting between two defenders to clip it first time past the keeper from 8 yards.

From that point on, Sholing controlled the half, remaining strong at the back with Byron & Roundell winning nearly everything in the air and on the floor with Marv clearing things up and Royl keeping it tidy after coming on.  Jake Hoole continued to whip in some lovely left wing crosses as Stu Green & Brad Targett pulled the home defence all over the place and Dan provided the focal point, winning and holding the ball up well.

When Melksham did get a couple of shots on target, they were thwarted by Ryan Gosney, who first tipped over a shot as the forward cut in from the left. He did even better in added time, getting his finger tips to a thunderous 25 yard shot that smacked the bar.  The scoreline and win was no more than Sholing deserved. Probably our best performance over 90 minutes this season, with every player performing to a high standard.  FT 1-4

Many thanks to our supporters & volunteers for making the long journey on a Monday night to support the team.

Also, many thanks to Melksham Town for their excellent hospitality, warm welcome and sportsmanship.  If we are both in the same league next season, would be great to visit their wonderful ground again on a nice summer's day.

A Gallery of Match Photos can be viewed by clicking here 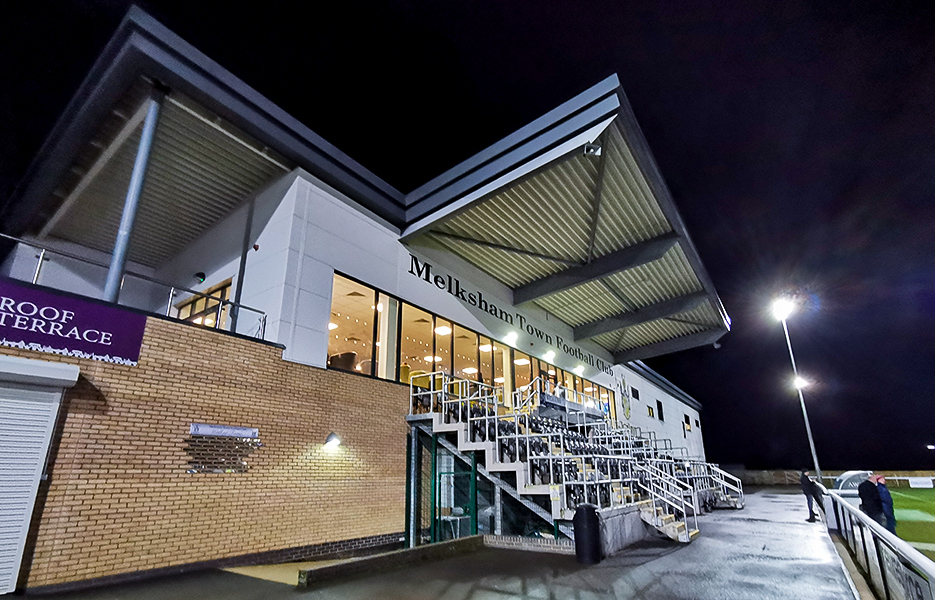