Brad Targett scored a hat-trick as Sholing advanced in the Hampshire Senior Cup.  There was also a brace for Alex Sawyer and a first goal for the club for James Lauder as the Boatmen scored six on the Island.

Team News : With one eye on Saturday's FA Cup tie, there were some changes to the starting line-up, but with the Reserves playing the same night, it was still the first team squad on show. TJ took the Captain's armband with Byron on the bench.  Newport had ex-Sholing player Connor Kelly in their line-up as they fielded a team of the very young with the very experienced.

With Wessex Division One side, Newport IW, forced to groundshare for the immediate future, the match took place at East Cowes Vics ground, meaning a first visit to Beatrice Avenue for most of the Sholing players and supporters.  It had been a warm day on arrival on the Island, but the temperature was dropping fast as the sun set & the game got underway on a dry pitch.

Was an even opening, but Sholing went in front on 16 mins as Dan Mason controlled a ball with his back to goal and lifted it into the path of BRAD TARGETT, free in the middle of the box, who knocked the ball first time past Streeter and into the corner.  Game was shortly stopped when a small dog decided to invade the pitch, much to the crowd's amusement.  Sholing had a good shout for a penalty as Dan Mason appeared to be chopped down, but the referee waved it away.  Newport created some decent chances, but hurried finishing let them down, plus Gosney did well to save Joe Craig's shot after an underhit backpass was presented to him.  He was to shoot wide soon after.

Sholing had their second goal on 31 mins when Dan Mason backheeled the ball to Marv McLean on the overlap and his low cross into the 6 yard box found BRAD TARGETT.  His first effort was half blocked, but he was able to poke the ball back past the keeper.  10 minutes later and it was 3-0 as Owen Royl found space in midfield and he lay the ball to JAMES LAUDER on the edge of the area to shoot low across the keeper and into the far corner for his first goal for the club.  HT 0-3

After the restart and Sholing were camped in the Newport half and soon got their reward as Brad Targett turned provider, passing to ALEX SAWYER to score for the 3rd game in succession.   The goal of the game arrived on the hour mark and it was eyecatching stuff as Dan Mason & ALEX SAWYER did an exhibition of pass and move football, with some rapid interplay on the right of the area that allowed Alex to find space and fire into the corner.    Dan Mason was looking to get on the scoresheet, but was unlucky a couple of times and probably should have done better with a header from a great cross on the run by Marlon.

Newport did almost score a spectacular goal on 75 mins as Lewis Wright smashed a 25 yard shot that hammered off the underside of the bar, bouncing down, but back into play.  Alex Sawyer thought he had a hat-trick when more good passing allowed him a shot from the edge of the box, but Gary Streeter did well to tip it over the bar.   With the last action of the game, Sholing had their 6th and BRAD TARGETT his hat-trick.  A corner was swung to the far post where Dan Miller headed it back and Brad nodded goalwards, with it taking a deflection to beat the keeper.  FT 0-6

Many thanks to Newport IW & East Cowes Vics for their hospitality. 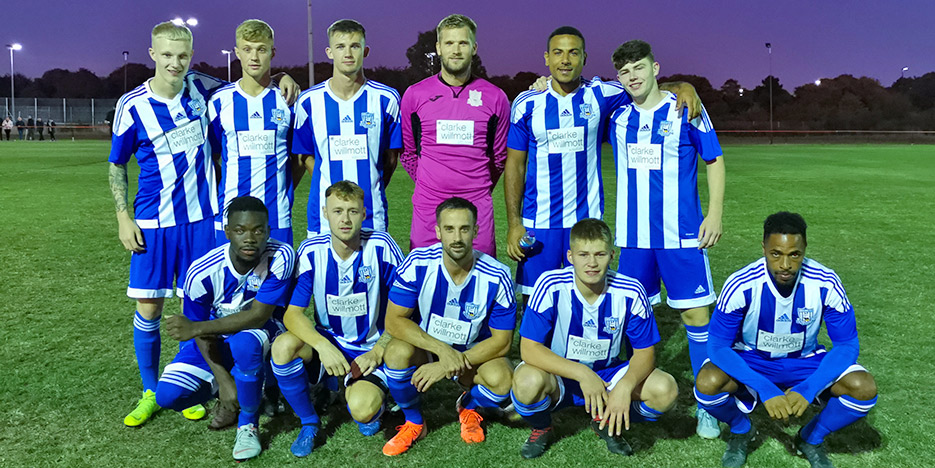