A changed Sholing line-up still kept up the form of the season with an impressive first half display that also contained the sight of goalkeeper, Ryan Gosney, scoring a penalty!  Further goals by Jamie Bulpitt, Lee Wort & Brad Targett and a response by Bemerton's Owen saw the fans treated to a memorable first 45 mins.

Team News : With the title secured and Sholing playing their 11th game of an energy sapping March, Dave Diaper shuffled his pack, giving a debut at left back to James Johnson and handing the captains armband to Jamie Bulpitt for the first time. Kev Brewster came in at right back and Owen Royl partnered Miller in the middle of defence. Bradey Norton & Owen Roundell joined Bully in midfield with a front 3 of Targett, Hoole & Dan Mason.  The Sholing bench was possibly stronger than any ever seen at this level.

Bemerton & the match officials, very kindly gave Sholing a guard of honour as they made their way onto the pitch, escorted by Sholing U10 Whites as mascots.  It was a glorious warm & sunny day and the relaxed atmosphere before kick off was continued into the early stages of the match where the only moment of note was Gosney getting away with a sliced clearance.

He was to be involved a few minutes later, but up the other end of the pitch!  On 13 minutes, Dan Mason went up for a bouncing through ball with the Bemerton keeper. Kemplen got none of the ball and all of Dan Mason, clattering into the striker just inside the box.  There was some confusion as the referee didn't clearly indicate a penalty had been awarded, so while Dan received treatment, a succession of players were asking the ref what he had given. There was more confusion for the spectators as RYAN GOSNEY wandered forward and picked up the ball and placed it on the spot.  The keeper drilled his effort low into the left corner of the net beyond the dive of his opposite number to score an emphatic pen.  Gos had scored a goal before for his previous team, Follands, with a header, but this was his first for the Boatmen.

Lee Wort had planned to come on at half time, but had to make an earlier appearance as Dan Mason was struggling after his collision.  On 24 minutes, Sholing had their second when JAMIE BULPITT played a lovely one-two with Bradey Norton to free him into the box where his first time shot took a deflection off a defender to find the top corner.  It was Bully's first goal of a season that was largely interupted by injury.  Sholing were having fun now, pulling the visitors all over the place with quick possession football through midfield and it was no surprise they got a third goal on the half hour mark.  After sustained pressure, Kevin Brewster collected the ball on the right, looked up and delivered a perfect cross to the far post for LEE WORT to nod in.  That made it 100 goals this season for his partnership with Dan Mason. An incredible achievement.

Sholing continued to pour forward and quickly made it 4-0 as a nice move down the left saw Jake Hoole dash down the wing and his pinpoint low cross into the 6 yard box was met by the arriving BRAD TARGETT with a simple side foot finish into the empty net.  There was another goal before half time, the only surprise is that it didn't go to Sholing.  Bemerton rounded off a good move as Drake crossed for an unmarked Robbie Owen to tap in at the far post.  HT 4-1

For the second game in a row, there was a strangely long half time break, but at least it allowed fans to soak up the sun before we got underway again.  Was always going to be hard to live up to the first half for entertainment, although Lee Wort did try a skillful flick over the defender and scissorskick, but didn't catch it clean enough to worry the keeper.

The Boatmen were overplaying a bit in the final third and on 58 minutes, were trying to walk the ball in as three players all tried to set each other up, with the final shot finally coming from Norton, but it flashed just over the bar.  Owen Roundell then saw his header well saved by the keeper.

James Johnson was having a good debut, but was unlucky to get a yellow for his first foul, especially when other challenges in the game went without a caution.  A flurry of substitutions also slowed the tempo of the game, with not much goalmouth action apart from TJ drilling a lovely crossfield pass to Targett, but his first touch let him down as he raced towards the keeper.  Ryan Gosney was back into more familiar action just before the final whistle with a superb diving save.  The win put Sholing 23 points ahead of second place, having become the second club in the country to win a league title this season (pipped by one day by Dunston UTS in the Northern League).  FT 4-1

Sholing will receive the Wessex League Trophy at our next home game on Saturday 6 April. There is FREE admission for this special occasion.

Photos Courtesy of Ray Routledge (click an image to enlarge)

Dave Diaper interviewed by the Non League Paper this week: 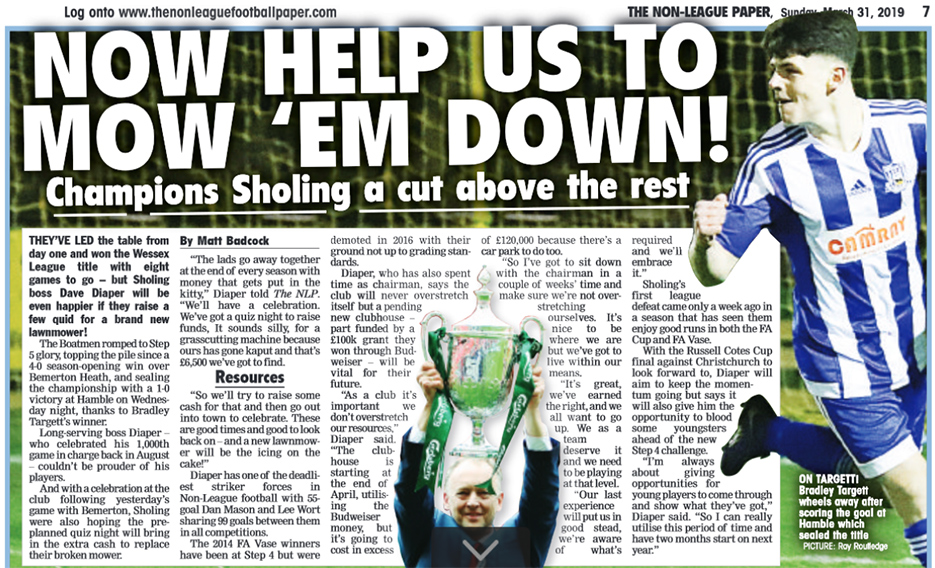