Man of the Match: Marlon Mason

The young Boatmen bounced back following last week’s 1-0 defeat away to Newport. The last 8 matches have now yielded 32 goals with just 9 conceded as Marlon Mason hit a superb hat-trick as Sholing’s Development squad booked their spot in the Hampshire Intermediate Cup third round after beating Alresford reserves 5-3.The Boatmen raced into a 4-1 lead before two goals from the visitors in the closing stages set up a frantic finale. The hosts controlled the game throughout and will now face AFC Burton in the next round on 3rd December.

The match was played in damp gloomy conditions however this didn’t deter Marlon Mason who got the ball rolling when he fired his side ahead inside the opening two minutes. Kristian Cozzolino played him through and the striker made no mistake with a clinical, low finish from close range.

Sholing were dominant early on and had three good chances to double their lead in quick succession as Cozzolino went close with a header, Joel Drew flashed a shot narrowly wide and Luke Bergg forced a smart stop from Alresford keeper Will Barnett. A superb defensive header from Jack Attrill denied Mason Baptiste at the other end and Will Barnett blocked well to keep out Jean-Luc Ramdin after a swift counter-attack.

The visitors found themselves level against the run of play eight minutes shy of the interval when Baptiste’s flick on picked out Jack Wiffen to round Jordan Brooks and finish well on the angle.

Parity did not last long, however, and Sholing quickly restored their advantage when Luke Bergg and Jean-Luc Ramdin linked up superbly for the latter to curl home his effort from 18-yards on the cusp of half-time. HT 2-1 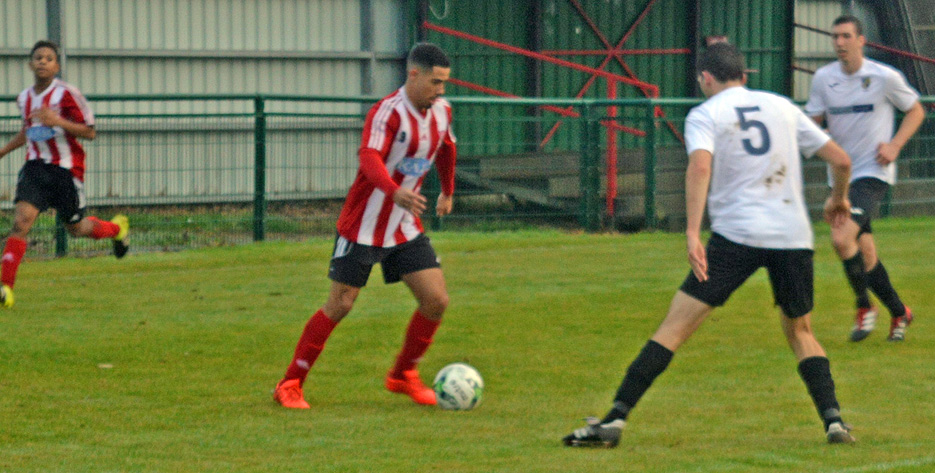 Jack Wiffen went close from distance and Joel Drew fired over the bar before Marlon Mason notched his Second and his side’s third on the hour after some more good work on the wing from Jean-Luc Ramdin. Jordan Brooks saved well from Alresford substitute Sam Ross but Sholing put the result beyond any lingering doubt with their fourth three minutes later. A superb save from Will Barnett kept out Luke Bergg’s initial header from a corner but he was powerless to prevent Kieran Winman following-up after the visitors had failed to clear.

Luke Turner and Scott Shearman went close at the other end and Luke Bergg could have made it five but despite two late consolation efforts from Jack Wiffen & Luke Turner on 82 & 87 minutes Alresford never really looked like a comeback and Marlon Mason settled matters in the final minute by completing his hattrick. FT 5-3