Sholing bowed out of the FA cup in their 10th game this season as they went toe to toe with the higher ranked Chippenham town, who scraped a 1-0 win at the Silverlake Arena.

Sholing made only one change to the team that beat Fleet by one goal midweek as the unavailable Kane Crisp was replaced by Taurean Manders at left back. Alex Baldacchino, Jack Smith, Barry Mason and Lewis Fennemore all remain out injured, and Pete Castle continues his return from surgery. 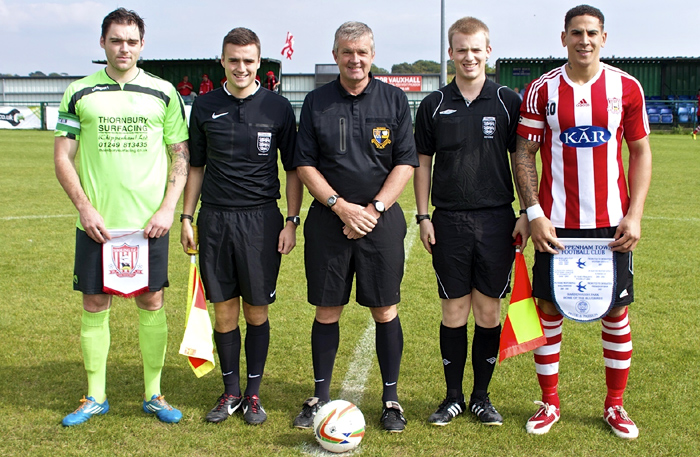 Chippenham Town began the first half, having had to make a late change to their starting line-up, as Alex Ferguson was judged to be struggling after picking up an injury midweek, he was replaced by Iain Harvey. The Wiltshire team were quick out of the blocks though, looking to break against Sholing whenever they could, and after 2 minutes a Chippenham breakaway presented Jordan Roberts with a chance, but his strike was tame and bobbled through to a grateful Matt Brown.

And it took just 5 more minutes before the next great chance, and this time the away team took it. Late replacement Iain Harvey took a quick free kick which stunned the Boatmen defence, the pass to Jordan Roberts put the Chippenham man through, but instead of having a go himself he slid the ball across the face of goal to England Futsal captain Luke Ballinger who had the simple job of tapping in.

But Sholing responded well and they were presented with 2 chances in a minute, the first of which saw Dan Mason unable to climb high enough to connect with TJ Cuthberston’s teasing cross and the other saw the other Mason, Byron, hook the ball narrowly wide of the far post.

Chippenham then had a succession of 3 corners in 2 minutes, but after all were dealt with, it was the home team who had another great chance after Dan Mason had his shot blocked after being found by another brilliant low ball from Cuthbertson. But Chippenham came again and Matt Brown was forced into making a stunning reaction save to deny Connor McCormack after James Guthrie’s free kick was knocked on twice inside the area.

But true to the game it was Sholing who then came back, Nick Watts carried the ball forward with a surging run deep into the Chippenham half, but his shot was well off target. Sholing then forced the goalkeeper Kent Kauppinen into a fine save as Kevin Brewster’s central free kick was dipping in below the bar before Kauppinen got across to tip it over, the subsequent corner was smashed over the bar by Watts after he picked up the headed clearance. The final action of the first half saw Mike Byrne booked for a lunging tackle on James Guthrie. HT 0-1

Chippenham began the second half attempting to double their lead and Luke Ballinger’s looping header had Matt Brown scrambling despite going wide. And Iain Harvey dragged a shot wide when it looked as though he really should have scored.

But again Sholing came back with corners in 5 minutes which all made the away side conscious of the back post run of Stuart Mott. It wasn’t long before Matt Brown was called into action again, having to claim 2 whipped in balls in as many minutes. But the best of all was when he manage to not only stop, but catch Michael Pook’s bullet header from a Guthrie corner.

At this point the game was real end to end stuff at this point as both teams tried to claim the still seemly open game, crosses continued to fly in from the Boatmen, but a Sholing cross was just too far forward for captain Byron Mason to latch onto. Nick Watts still looked bright and another pressing run saw him evade two Chippenham tackles before misplacing his pass.

Despite the slender lead they held, Chippenham refused to sit back and defend, and perhaps James Guthrie should have been rewarded for his persistence after reclaiming the ball in the Sholing half before seeing his shot pushed away by Brown.

A tense final minutes saw a number of long balls turned away by the Chippenham defence and there was relief after the final whistle on the away fans faces. But Sholing gave the Southern Premier side a real scare and should be proud of the way they fought valiantly. FT 0-1

After the game Sholing manager Dave Fear said “I’m disappointed with the result obviously, but not with the way the guys played, they gave everything today. It was just one of those games where you just turn around and say it wasn’t for us”