Man of the Match :  Barry Mason

Boatmen were almost on the end of a cup upset at Wessex League Lymington, but in terrible weather conditions, fought back to force a penalty shoot-out, in which Rory Anderson pulled off two great saves & all the Sholing lads scored from the spot.

Team News: Rory Anderson returned in goal, plus before the game Matt Brown took part in his first training session since having the splint off his broken finger. Mike Byrne returned from a hamstring injury to replace Pete Castle.  Marv was handed his first start in almost three months. 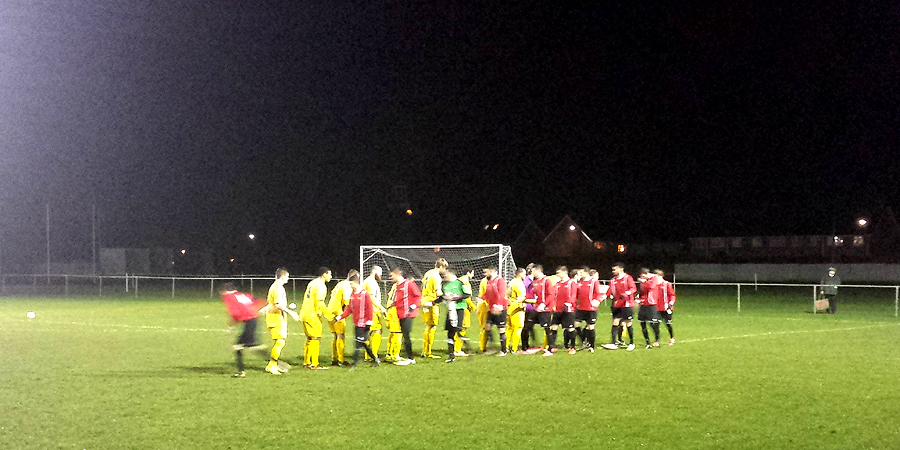 Lymington had the strong wind at their backs in the first half as it blew right down the middle of the pitch, bringing down sideways rain with it.  With those conditions in mind, wasn't surprising that the home team settled quickest and took the lead on 9 minutes. Sholing were trying to shepherd the ball out for a goalkick, but a Lymington player hooked the ball back into the path of Sam Roberts who 10 yards out on the angle, fired across Rory and into the far corner.  With their tails up, Lymington had the better of the early exchanges with Rose firing wide as the impressive Roberts seemed to be the only player able to bring the ball down and play some passes.  Sholing slowly got a foothold and first threatened on 22 minutes when Alex Sawyer connected well with a 30 yard central effort, but was straight into the keepers arms.  As the weather got worse, was no surprise the game did for both sides.  Just before half time, Byron cut in from the right and his shot took the slightest of deflections to lift it just over the bar and for a corner.  HT 1-0

The wind relented a little for the restart, but was still strong and now with the Boatmen.  Inside a minute a right wing cross by Nick Watts hung up right under the crossbar and with it dropping behind the keeper, Lymington were thankful there was a defender on hand to hack clear.  There was almost a carbon copy a few minutes later when a Wattsie cross was helped on by the wind and tipped onto the bar by the keeper.  From the corner, the post was then hit when a Sholing head nodded down in the usual melee of bodies at the set piece.  It was one-way traffic as Lymington now struggled to play into the wind and were starting to tire.  On 73 minutes the Boatmen won a freekick on the edge of the area and after a bit of handbags setting up the wall, Barry Mason finally took it and his low shot skimmed off a leg and flashed just wide.  Marv was replaced by Kevin Brewster, who with his first touch fired in a rasping shot that looked destined for the top corner until Williamson brilliantly tipped it round the post.  It was Brewster again who went close, this time a low curling effort was pushed round for a corner.  The pressure was growing and with nine minutes remaining, Dan Mason was hauled back as he was about to shoot and the referee pointed to the spot.  BARRY MASON slammed home the penalty into the bottom left hand corner.  We went searching for the winner, but strangely Lymington seemed content to waste a bit of time to take the game to a penalty shootout.  FT 1-1

After what seemed an age (thank goodness we didn't have 30 minutes of extra time, think players & fans were in total agreement of that!) the Referee organised the shootout, which took place in the right hand goal (into the wind).  Kevin Brewster stepped up first and scored into the corner.  Lymington scored with their first kick, then Byron placed his effort just inside the post to give Sholing a 2-1 lead.  Lymington's next kick was brilliantly saved by Rory Anderson as he flung himself to his left to push it round the post.  Wattsie hammered his shot into the roof of net before Rory pulled off another great save, this time to his right.  So that left Barry Mason with the chance to win the game, which he duly did by powering a shot high & down the middle.  4-1 on Penalties to Sholing.  We now go into the Semi Final of the Hampshire Cup.  Other winners tonight were Gosport & Farnborough.  Horndean & AFC Bournemouth play next week.