Man of the Match :  TJ Cuthbertson

Sholing played the part of big boys rather than underdog, coming up against Tadley Calleva who play their football two divisions below the Boatmen. And it took a last gasp Dan Mason goal to see off Tadley as Sholing progressed in the Hampshire Senior Cup on a freezing cold night at the Silverlake Arena. 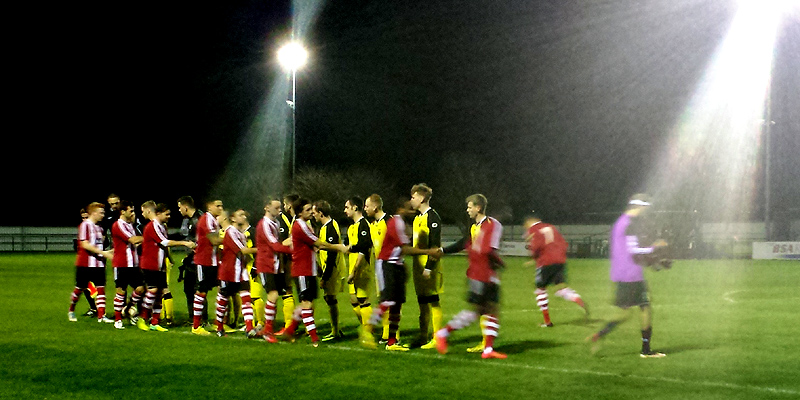 Before kick-off there was a welcome back to Byron Mason, dual-signed with Gosport, who allowed him to get some much needed match practice. Byron started at number 10.

Tadley got the first real chance of the game, a long goal kick split the Sholing defence open, but thankfully Rory Anderson was able to meet Brett Denham’s looping effort and tip it over the bar for a corner

Sholing had the better of the play in the opening 10 minutes, but neither team was able to develop any clear cut chances. The Boatmen were stringing together some decent passing moves and it looked as though the team was able to enjoy themselves after a hard performance against Farnborough on Saturday. Smooth play between brothers Byron and Barry Mason saw captain Barry through, but his effort was all power and no precision and ultimately the ball was sent into the middle of next week, and the next field.

As for Tadley, they were getting into some good positions and some players were running into dangerous pockets of space, but some of the passing decisions were off, and so were the deliveries. They were given time on the ball at the back and only sent a 3 man front when going forward. Denham missed another good chance after being found in plenty of space in the box with his back to goal, but his turn affected his strike and what looked to be a simple finish was sent sailing over the bar.

Sholing looked sloppy a quarter of the way through the game, passes and man marking went astray. Alex Sawyer hit another wild strike that more of a danger to the local wildlife than the goal. Sholing were then unfortunate not to take the lead, the goalkeeper struggled to deal with a pass back and was hustled off the ball by Byron Mason, he clipped the ball to Alex Baldacchino who saw his bended effort blocked on its way to the goal by a well-placed Tadley defender. And then a brilliant save kept out a Byron Mason volley after he was found by Tobi Adenkunle after he blitzed down the left. A goal kick was given, but after some deliberation between the officials the corner was rightly given. But nothing came of it.

Sholing were then made to pay as James Tennant put Tadley ahead. He was found on his own as the highest man up for Tadley, and after a few jiggles and twists pulled his strike away into the near side of Rory Anderson’s goal to put the away side ahead, maybe deservedly, in the last action of the first half. HT 0-1

Sholing bought on Mike Byrne and Nick Watts at half time to maybe put more kick back in the Sholing side. Kevin Brewster saw an early free kick easily caught at the near post and a fine 1 on 1 Rory Anderson save later, he had another chance but closer. Brewster whipped the ball over the wall to draw a good save by the outstretched goalkeeper. The resulting corner was cleared before it even reached the near post.

The game then died for the next 10 minutes, Alex Baldacchino was quiet other than a mishit effort straight at the keeper. Rory Anderson thankfully was more alive and pulled off a remarkable save to deny a Tadley effort destined for goal just after the hour mark.

Barry Mason ran clear of the Calleva back line to bring a looped ball down, he took a controlling touch before falling as he took his shot. The effort was saved by the goalkeeper who was superb when called upon for difficult shots, but looked nervous handling more straight forward efforts. 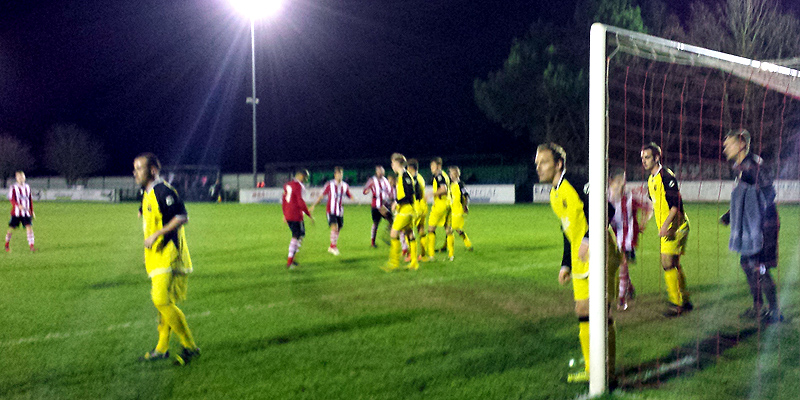 It was clear Tadley were sitting deep and were giving Sholing time in their half. But the Boatmen were restricted to nothing more than long strikes. One of them resulted in a corner which gave Sholing their best effort yet as a glancing Byron Mason header drifted wide. Alex Sawyer faded to the back post a few minutes later but his goal bound header was again blocked by a yellow shirt.  It seemed like it could be one of those nights, but finally Sholing's increased pressure against a tiring Tadley team paid off.

Kevin Brewster whipped a long ball in from a free kick into the box. A game of pinball later the ball fell graciously to TJ CUTHBERTSON who nodded home unchallenged.  The Boatmen raced to get the game re-started, sniffing the chance to win, although with a Tadley player down for a few minutes, they had to wait, but not long...

As the clock ticked to 90 minutes, a Kevin Brewster free kick took a touch from Byron and drew a flying save from the goalkeeper, however the palmed clearance was seized upon and squared back to DAN MASON who did the honours tapping in from close range to complete the comeback. Cheers rang around the ground as the referee blew the final whistle. The home fans knew this result was a fortunate one. FT 2-1

After the game, Sholing manager Dave Diaper said “I was pleased with the character, the character was brilliant. It is never easy to play a team 2 leagues lower, you have only got to ask Farnborough about that, they worked hard and to be fair they weren’t a bad team, but in football you have got to play to the 90 minutes and that is what we did.”