Sholing have signed Declan McCarthy from Lymington Town.  The 6'2" 17 year old attacking midfielder was previously at AFC Bournemouth's academy, but has been playing this season in the Wessex League, starting 12 games and scoring once for Lymo.

Season tickets for the remaining 10 home league games are now available! Adults £50, 65 & over/Students £30, U16 £15. This includes the local derby games against Totton & Bashley. For more details please contact Greg Dickson on 07948 832944 or secretary@sholingfc.com or get them at the home games against Larkhall or Bishops Cleeve this week.

After turning out for Sholing in the Hampshire Cup on Wednesday, it appears that wasn't a one-off and Byron Mason is likely to stay with the Boatmen for the remainer of this season.  His dual-signed status with Gosport Borough always allowed for one-off returns, but as Wendy Gee in the Echo Reports, Dave Diaper expects the Vase winning Captain to stick around.

Dave Diaper told the Echo: “Byron’s only had about 40 minutes of football in the last six weeks and it was pleasing to have him back with us. Alex Pike is very fortunate to have a team that can’t stop winning and it’s hard to change a winning line-up. Byron understands that and, as far as I know, he’s back with us now. I think it would be best to wait now until the end of the season and, if Alex wants to revisit Byron, to do it then. Byron’s not played much, but it won’t take long for him to get back into it."

Diaps also spoke about a possible move for Lee Wort in the New Year :"Gosport have got people who can score goals and that’s one thing we’re lacking at the moment, we’re looking a bit blunt up top. Lee’s on my Christmas list, but I don’t think it’s going to happen! Worty's a sensible lad and he knows that while the front two of Bennett and Paterson are firing like they are it’s going to be difficult to get in the Gosport team, but it was good to hear he scored the other night.”

Another player who has joined the Boatmen this week is Anthony Giles.  A 21 year old Centre Half who joins us from Fareham Town.  He spent some time last year playing in America and this week made his Sholing debut for the Reserves at Dorchester Town.  The Reserves were very unlucky to lose that game to a goal in the 93rd minute.  Also making his debut that night was Tomas Halverson, who played for an hour as he builds up his fitness.  He hasn't played since the Norwegian season ended a couple of months ago.

The club has made a couple of 7 day approaches for players recently, we'll let you know here first if they are successful.

In honour of the 1914 Christmas Truce and the game of football that is reputed to have taken place in no-man’s- land, the British Army’s Football Team will again take on their German counterparts in a commemorative match called ‘The Game of Truce’; kick-off at 7:30pm Wednesday 17th December at Aldershot Town FC.

In a collaborative venture between the Football Association, the Army and Aldershot Town Football Club the game will fittingly take place in Aldershot Town FC’s ES Stadium. The match will be the culmination of the FA’s ‘Football Remembers’ in which players, staff and fans have been encouraged to pay their respects and commemorate those who swapped football boots for Army boots 100 years ago.

It is expected to be an extremely competitive game between two evenly matched military teams. High profile guests will include FA Chairman Greg Dyke, Head of the Army General Sir Nicholas Carter and a number of footballs personalities past and present.

Tickets for the game are priced at £3.00 for adults and £1.00 for U18s and Concessions which are available through Aldershot Town Football Club. All proceeds from the match will be donated to the Royal British Legion and the German Military’s equivalent charity. Pay turnstiles will also be open on the evening.

The Game of Truce is the only joint Army – FA commemoration planned for the First World War centenary. It honours the spirit of the 1914 Christmas Truce using the international language of football and is a fitting commemoration to the men on both sides who spent Christmas 1914 in the trenches.

Welcome to the Silverlake Arena to Tomas S Halvorsen, who has joined Sholing FC after impressing Dave Diaper in some recent training sessions.  Tomas is from Norway, 24 years old and a Central Midfielder.  He has played semi-professional football in his home country and whilst studying in Leeds, played for Guiseley AFC in the Conference North.  Most recently he played for Eidsvold Turn FC in the Norwegian second division (3rd tier). He's now studying in Southampton.  We hope to announce some further additions to the squad in the coming days, once paperwork has been completed.

Before kick off, Dave Diaper was presented with a replica of the FA Vase, along with a plaque from the Football Association.  John Ward, ex-chairman of Hampshire FA made the presentation.  It is hoped the Plaque and Replica will take pride of place in the new clubhouse... once built.   Click an image below to enlarge.

27 November - From the Dugout 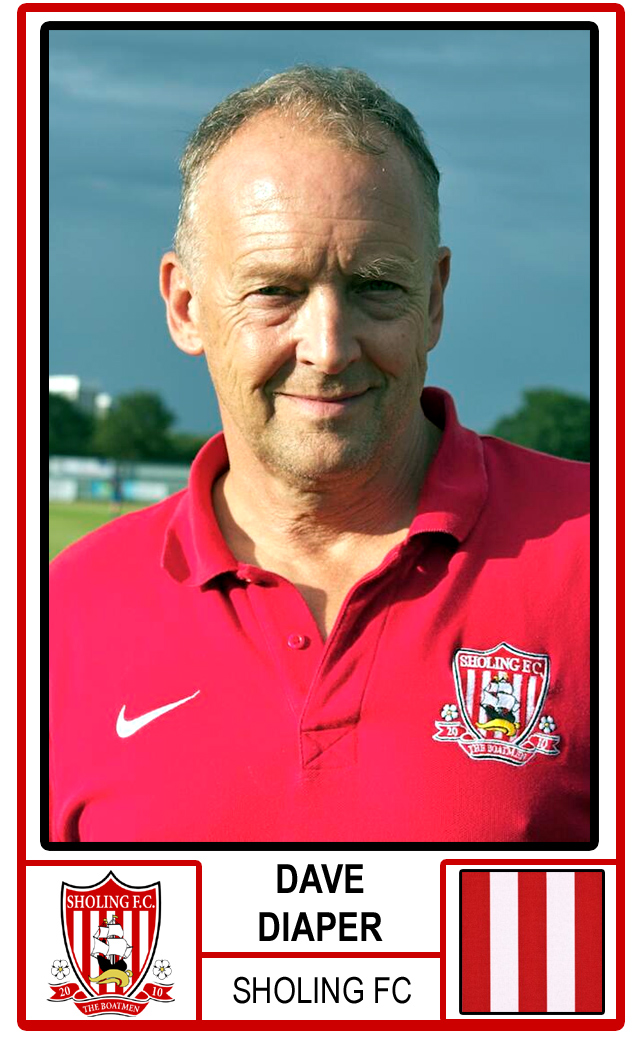 Welcome to the Silverlake Arena for Saturday's 3rd Qualifying Round of the FA Trophy against Farnborough FC. Farnborough, who play in the Conference South, are no strangers to the Silverlake and indeed came here in February and beat us 4-2 in the Russell Cotes Cup 1/4 Final.

There are only 5 Sholing players on show this weekend that featured that night back in February. They are TJ, Kev Brewster, Barry Mason, Alex Sawyer and Nick Watts with the other players either moving on to Gosport or retiring at the top with our win at Wembley.

One of the most memorable matches between the clubs was back in 2011 when we travelled to Farnborough and beat them 3-1 in the Hampshire Senior Cup Semi Final. Farnborough were then managed by Garry Haylock and we caught them cold on the night and thoroughly deserved the win that took us to St. Mary's.

We come into today's game in good form with 4 wins from the last 5 games, but today will be a real test for us against a side that are 2 levels above us in the pyramid system and themselves winning their last 2 matches. Spencer Day has worked hard to turn the fortunes of the club around.

I have never known a season that we have suffered more injuries than this one with Matt Brown being added to the list that seems to grow with every game. We currently have, at time of writing, SIX first team players who are missing from the squad. This obviously weakens us, but one thing has been apparent since my return to management, is that the players have given their all in every game. No more than the two trips to Dereham Town in the previous round where we showed great character and desire to stay in this competition. There has been cup upsets before and I am sure Spencer will be telling his players not to underestimate us. To be honest, if they play to their best and we play to our best they will win the game but nothing is ever as easy as that... is it? - Diaps

20 November - From the Dugout

Saturday's Southern League fixture is against Mangotsfield, they are above us in the league (most teams are at the moment) so it is vital that we give it our all to secure the 3 points needed to climb the table.

Well, what a week this has been. We have traveled over 800 miles in our quest to get through to the next round of the FA Trophy and if there was ever a doubt about the commitment of the players, that now could never be questioned. Those of you who traveled to Dereham last Saturday saw a vintage performance from the lads and I was confident that we would have at the very least brought them back to the Silverlake in midweek and finish the job off. Unfortunately, the Fog scuppered that chance and we reluctantly had to come to terms with the thought of traveling another 400 mile round trip on Tuesday.

Tuesday's game arrived with us missing Dan Miller who picked up a nasty injury from Saturday's game, so Mick Byrne stepped up to the plate and I must say had a great game winning the majority of headers in the battle with Dereham's center forward. We know we are lacking a bit of quality at the moment, but that wasn't evident on the night and we thoroughly deserved our 2-0 win against a Dereham side that came into the game in fine form.

This week I have seen the players grow in confidence and self belief two ingredients essential for success. Yes, we still have a long way to go, but the signs are promising and we know our limitations, but also have realistic ambitions and one of those is to start climbing the table sooner rather than later.

We have been plagued by injuries this season and the list is growing and Sam Olaofe is the latest to be added to the list as he suffered a back injury on Tuesday. Also TJ is doubtful with a foot injury, Dan Miller will be out for a couple of weeks and Lee Webber is still out after suffering a bad cut.  It is my intention to try and give as many opportunities to reserve players to step up to the plate as possible, as we have a talented group of lads at our disposal who need to be trusted with a shirt as giving them experience at Southern League Level is vital for their progression.

Sholing FC are deeply sad to hear of the passing of John Stimpson.  John was life President at Gosport Borough and also the founding chairman of the Wyvern League. He was well known to members of our committee and liked throughout local non-league football circles. Deepest sympathies to his Family & friends. RIP John.

Link to Statement from Gosport Borough

Available now at Sholing home games are new Bobblehats & Limited Edition FA Vase commemorative Pin Badges.  The Bobblehats are £10 each (one size fits all). Pinbadges are £5 each (20mm with Butterfly clasp). There are a limited number of Pinbadges on sale on Ebay here.