Boatmen's jekyll and hyde start to the league season continued as we slipped to a frustrating defeat at Basingstoke.  Sholing had the chances to have come away with a draw or maybe a win, but couldn't convert them with the home side more clinical and saw out a late barrage to grab all the points.

Team News : TJ joined Watts on the injured list, so Marv went to right back and Jake to left back, with Brad Targett recalled and Roundell partnering Miller at the back.

With Basingstoke still homeless and awaiting approval to start using Hampshire FA's base at Winklebury, the game took place at Winchester City's ground.   Wasn't much to report for the opening 10 minutes, but Sholing had the first decent chance when Stu Green released Dan Mason in the right channel, with his effort pushed out by the keeper, back to Dan, who from a tight angle hit the rebound, with it deflecting off a defender and into the side netting, but a goal kick was given.  Playing against his former side, Claudio Herbert twice went on mazy runs, cutting in from the right and beating players on the edge of the box, with his first shot straight at the keeper and his second flashing wide of the post.

Sholing looked to be taking control, but it was Basingstoke who took the lead on 25 mins. A quick break sees Dylan Ive afforded a lot of space to take the ball on and shoot, with his effort blocked and it falling fortunately to George Reid alone in the box to finish past Gosney.   Boatmen continued to press forward and create chances with Stu Green flicking a header just wide when well placed 8 yards out.   Next up to win a free header was Byron from a freekick, but he put it over the bar.  There were good shouts for a penalty on 42 mins when Dan Mason was set to meet a cross into the box, but the defender only had eyes for D-Dan, knocking him to the ground as the ball came in with the ref waving play on.   Dan was involved again just before half time as Marv cut onto his favoured left peg to put in a tempting cross into the middle of the box which Dan met with an attempted overhead that was off target.  Sholing found themselves behind at the break, despite dominating the chances. HT 1-0 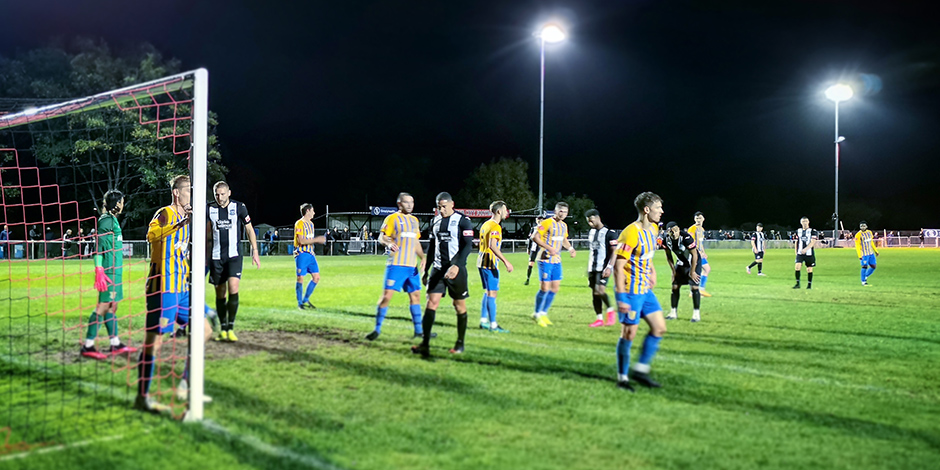 Basingstoke started the brighter after the restart with Gosney called to beat away a powerful shot on 50 mins, but there was nothing he could do 3 minutes later to stop the home side doubling their lead.  It was a great finish, but poor play initially by Sholing to give the ball away on the edge of our box, allowing George Reid to smash a shot beyond Gos and into the far corner.   Basingstoke were looking for a third with Gosney tipping another well struck shot over the angle of the post & crossbar as the Boatmen now offered very little going forward.

It took until the 70th minute for Sholing to raise their game and were unfortunate when a goalbound shot deflected off a Basingstoke defender, wrong foot the stranded keeper, but the ball rolled agonisingly inches wide.   Dan Mason then turned and shot, drawing a good save from Julian Schwarzer, son of the former Chelsea & Fulham keeper.  The bounce of the ball continued to favour Basingstoke as frustrations grew, although the home side were defending well and looked a much stronger and better organised side than they were last season.  They also were quick and incisive on the break, but it was Sholing who got the next goal.

On 82 minutes, a heavy pass looked to be going out for a goal kick, but Brad Targett did really well to both reach it and cut the ball back into the box for the arriving STU GREEN to poke the ball past the keeper for his 5th goal of the season.    Unfortunately for Sholing, despite plenty of corners and freekicks, the delivery was often disappointing as Basingstoke held firm and even the 6 minutes added on, was of no help to the Boatmen as we slipped to our 2nd league defeat and dropped down the table.  FT 2-1

The skipper, Byron Mason, said afterwards : "We can’t keep playing well one game then poorly another. Got to keep the same energy and fight every game, minimum!"